Even low concentrations of pollutants can alter animal behaviour 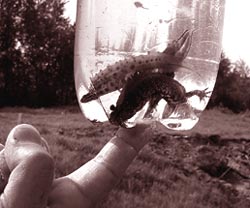 biologists have known for decades that environmental pollution is adversely affecting animal behaviour worldwide. High levels of pollutants can cause gender-bending effects by altering animals' physiology, particularly their sexual organs. Now, two comprehensive reviews reveal that chemicals have a much greater impact on animal behaviour than earlier understood. Low concentrations of these pollutants are changing both the social and mating behaviours of many species found in the wild. This potentially poses a far greater threat to their survival than, for example, falling sperm counts caused by very high chemical concentrations.

In one study, for instance, male starlings exposed to dicrotophos insecticide decreased their singing, displaying, flying and foraging activities by 50 per cent. And newts exposed to low levels of the pesticide endosulfan found it harder to sniff out the attractive pheromones of the potential mates. Researchers have also shown that increasing numbers of male western gulls hatched from eggs exposed to ddt attempt to mate with each other. The scientists also found that lead affects the balance of gulls, while the atrazine pesticide makes goldfish hyperactive and the chemical tcdd makes the play behaviour in macaques rougher.

Such unnatural behaviour is attributed to more than 100 chemicals originating from agricultural, industrial and municipal sources. These chemicals, called endocrine disruptors, include heavy metals, polychlorinated biphenyls and additives such as bisphenol a. Endocrine disruptors mimic naturally produced hormones, setting off adverse chemical reactions in the body.

"Not only are we failing to acknowledge the scale of the problem caused by these toxic substances, but we may be missing a trick: changes in animal behaviour could be an early warning that the chemicals are harmful. You might see behavioural effects long before you see a population crash," says Ethan Clotfelter of Amherst College in Massachusetts, usa, who is the lead author of one of the reviews published in the journal Animal Behaviour. Dustin Penn and Sarah Zala of the Konrad Lorenz Institute of Comparative Ethology at the Austrian Academy of Sciences agree. They have authored the second review of the effects of endocrine disruptors in the same journal. "The most important point is the incredible amount of evidence that this is a widespread problem," Penn says.

Both research groups say that biologists and toxicologists must wake up to the fact that different concentrations of chemicals can have unexpected effects. For instance, male mice exposed to low doses of some pesticides were found to increase their scent-marking behaviour, but they decreased it when exposed to higher concentrations.

The standard approach to studying toxicity, mostly via animal experiments, involves exposing isolated cells, eggs or whole animals to varying concentrations of a chemical. A dose-response curve is then evolved showing the quantitative relation between the dose administered (exposure) and the extent of adverse affects. This approach works well when toxicity is immediately apparent and when a simple monotonic relationship exists between dose and response. However, many endocrine disruptors differ from classic pollutants in two important aspects. Firstly, the toxicology rule -- "the dose makes the poison" -- is not always applicable to them. Secondly, the effects of some of these chemicals are greater at low doses than higher ones. "Disruptors that have been considered safe when tested at medium doses could have damaging effects at lower doses. Therefore, the standard approach needs to be drastically altered, our findings show," Penn and Zala warn in their review.

Other behavioural biologists back the authors' call for biologists and toxicologists to work more closely to determine the scale of the problem. "The behavioural problems have been pushed to the background, with most environmental scientists and regulators unscientifically focussing on mortality and cancer rates," says John McCarty of the University of Nebraska, usa.