Wildfires are burning holes in our pockets 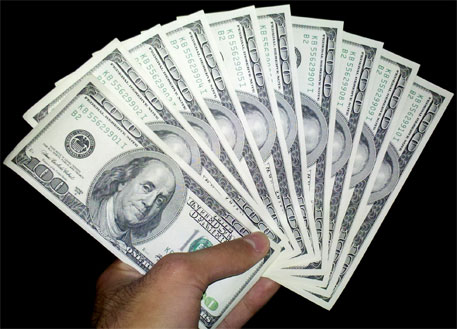 (This story originally appeared at OnEarth.org and is licensed under Creative Commons)

The governor of Oklahoma declared a state of emergency and a burn ban across 36 counties this week as miles-long wildfires raged out of control. Drought, high temperatures, and ripping winds have teamed up to create fire-friendly conditions across much of the state. One man has died, and more than 1,000 people have evacuated their homes. Meanwhile, 104 firefighters are being treated for heat-related illness.

And this year is looking a lot like last year (and the year before), in which wildfires became more frequent and fierce in the American West. Dry conditions—such as California’s current mega-drought—are priming forests and grasslands to burn, fire seasons are lasting longer, and years of poor land management have allowed wildfire fuel, such as dead trees and underbrush, to build up across the countryside

But that’s not all. A new government report says an unbalanced budget is also contributing to the rising flames.

The country has allocated $1.4 billion for fighting fires this year. That money pays for hot shot crews on the ground and water-bucket-equipped helicopters in the sky, among many other support services. But it all adds up quick—the infamous Yellowstone Fire of 1988 cost $240 million all by itself. And according to a new report from the United States Department of Agriculture, the actual cost of fighting wildfires in 2014 will exceed our budget by about $470 million.

How will we make up the difference? The US Forest Service and the Department of the Interior will have to once again employ “fire borrowing.” The practice satisfies immediate fire-fighting needs by pulling funds from long-term programs, such as thinning and controlled burns. At first blush, fire borrowing seems totally acceptable—after all, a little finagling is necessary in the face of emergencies, right?

Well, yes and no. While every fire feels like an emergency—especially those threatening lives and destroying homes—the word “emergency” implies that an event is a temporary, unexpected condition. And nowadays, fighting wildfires is the norm. California has already experienced three times as many wildfires this year than is typical. The fire season has lengthened 60 to 80 days in just the last 30 years, and in the same amount of time, the number of acres destroyed by wildfires has more than doubled. Fires scorch an average of 7 million acres each year. That is a whole lot of emergencies.

But aside from the semantics, fire borrowing might actually make us more vulnerable to wildfires in the long term. When the Forest Service and Interior Department divert funds to fight fires, there’s less money in the budget for fire prevention. The Forest Service, in particular, has been hit hard by budget reallocation over the last 20 years. As a result, the agency has more than doubled its roster of firefighters while it cut foresters and other staff by over 30 percent.

Perhaps, we should choose our battles more carefully. A growing body of research suggests that we should allow some fires to burn out on their own. This idea is unpopular among homeowners, but could dramatically reduce the amount of money we spend on firefighting each year—much of it doled out to private companies with their own lobbyists—and return the woods to a more natural state.

In the meantime, California has started getting creative about cutting wildfire costs. The state saves $80 million a year by training some of its non-violent convicts to fight fire. The inmates receive pay and time off their sentence, not to mention some seriously marketable job skills.

For its part, the Obama Administration has proposed a special clause in the 2015 budget that would kick in whenever costs exceed allocations. Several members of Congress have also introduced legislation that seeks more funding for prevention and suppression. But as the West braces for yet another fire season, we need to start implementing longer-term solutions. After all, it’s only going to get hotter…