Ancient giraffe relative was the largest cud-chewing mammal on Earth

With an estimated adult body mass of almost 1,250 kg, this relative of modern ruminants lived in the Himalayan foothills more than one million years ago 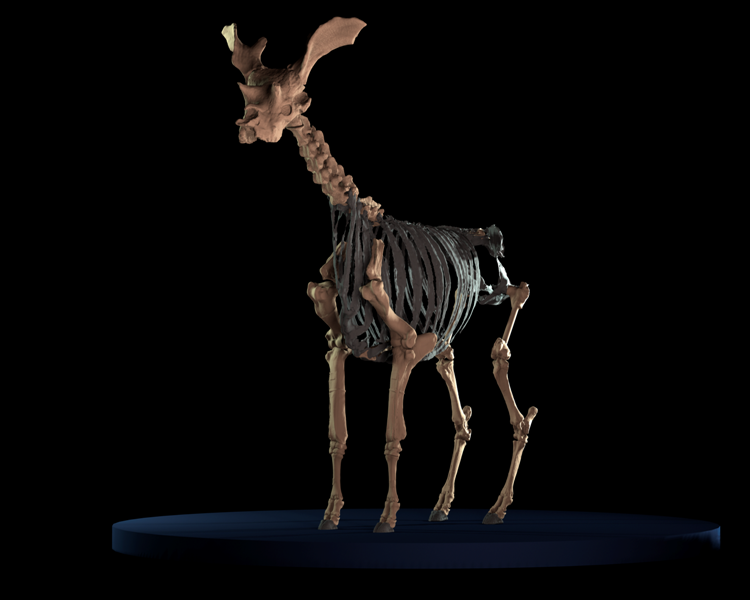 An ancient relative of the giraffe may have been the most massive ruminant to walk the earth, a new study by three British scientists has suggested.

The extinct species Sivatherium giganteum, now classified as a member of the giraffid family, would have had a shorter neck and stockier legs than the giraffe, according to the study published in the journal Biology Letters. With an estimated adult body mass of almost 1,250 kg, this relative of modern ruminants like sheep, goats, cattle and giraffes lived in the Himalayan foothills more than one million years ago.

When first discovered, scientists mistakenly thought the massive, moose-like creature was a link between modern ruminants and larger mammals like elephants and rhinoceroses because of its considerable heft. It was thought to be the size of African elephants, which can weigh up to 6,500 kg, but actually weighed about one-fifth of that number.

“Sivatherium giganteum was so strange at the time that it was discovered. It had a huge skull with a flat face, and twisted horns. It’s actually an extinct, close relation to modern giraffes. No one has worked on it much since it was discovered in 1800s,” lead researcher Christopher Basu told Down To Earth.

Using fossils found in India in the 1830s and currently housed in the Natural History Museum in London, the researchers constructed a 3-D computer model of the animal which would have been 5.9 feet tall at the shoulders. The digital skeleton was reconstructed using 26 fossilised bones from at least three animals.

“We have reconstructed the skeleton to the highest degree of accuracy possible, and used this to estimate its weight,” Basu said.

The researchers first made models of the known bones, adjusting them to make them fit at the joints and then filled the gaps with scaled-up versions of a modern giraffe’s pelvis and torso. After filling in the bones and measuring the animal’s volume, the researchers estimated that S. giganteum weighed 1,246 kg, which is 5 per cent more than an average male giraffe.

All known extinct relatives of the modern giraffid family, which consists of giraffes and okapi, had skeletons that are similar in shape.

The weight estimate is conservative as some of the model bones had to be shrunk by around 15 per cent to fit with bones from other creatures, suggesting that larger individuals of S. giganteum might have existed.

The team’s estimate also does not include the weight of the large, flattened horn-like appendages, which are approximately 70 centimetres (28 inches) long and were probably only present on the males of the species.

“We found that weighing in at over 1200 kg, this was likely the largest of the giraffe-like animals that ever existed, and so likely the largest ever ruminant to ever have existed. Sivatherium was really pushing the boundaries of size,” the researchers said.