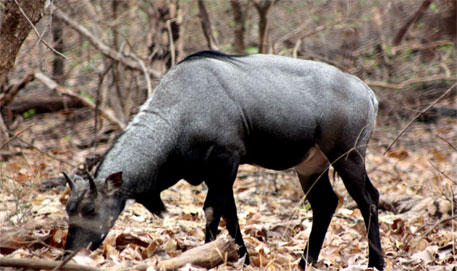 The Ministry of Environment, Forests and Climate Change (MoEFCC) is planning to allow the legitimate hunting of wild animals such as blue bulls (nilgai) and wild boars to tackle man-animal conflict.

According to environment minister Prakash Javadekar, the ministry is mulling the implementation of an office memorandum passed in December last year, which states that wild animals which destroy crops should be treated as vermins. However, the ministry’s move has drawn flak from animal rights groups.

In defence, Javadekar said that man-animal conflict was on the rise and farmers were finding it tough to protect their crops and property.

Both blue bulls and wild boars are declared wild under Schedule III of The Indian Wildlife (Protection) Act, 1972, which was later amended in 1993. The animals listed under this schedule are protected, but their hunting does not attract high penalties or severe punishments. But there is a procedure that can be applied to term these animals as vermins, Javadekar said.

According to him, Section 62 of the wildlife Act empowers the Centre to declare any wild animal, apart from rare and endangered species, to be classified as vermins, for a specified period of time.

The states’ response is crucial as information on man-animal conflict can be utilised by the ministry to declare such animals as vermins. The office memorandum sent to the states lays the rules and regulations under which the hunting of these animals can be carried out. The ministry is now awaiting the response from states.

According to last year’s office memorandum issued by the wildlife division under MoEFCC, human lives have been lost due to man-animal conflict, along with loss of crops and valuable property.

The memorandum also states that concerns have been raised by various MPs from time to time. Also, there have been suggestions from several quarters that since state forest departments do not have the power to issue orders to hunt down wild animals, the Centre must make regulations to ensure the safety of human life and property.

The memorandum suggests that these two animals should be put under Schedule V of the wildlife Act, so that their killing does not amount to illegality.

A high-level committee headed by former bureaucrat T S R Subramanian formed in 2014 by the BJP government recommended that MoEFCC should issue a circular, reminding state governments of the “authority already vested in them” to allow culling whenever necessary.

The Subramaniam committee also noted that Section 11(1)(b) of the wildlife Act empowers the chief wildlife warden or authorised officers to permit hunting of an animal or a group of animals specified in Schedule II, III and IV in a specified area if it has become dangerous to human life or property or is disabled or diseased beyond recovery.

Earlier, in March 2012, the ministry had issued an advisory for the management of blue bulls for protecting crops in 14 affected states, including Rajasthan.

Animal welfare groups such as People for Ethical Treatment of Animals (PETA) have, however, expressed their concern over the ministry’s decision.

“Ecological balance cannot be restored through the barrel of a gun. The spirit of the Indian Wildlife (Protection) Act, 1972 is clear: it is to protect and preserve wildlife, so to label them “vermin” and kill them runs counter to all that this vital legislation stands for and is contrary to the reasons behind its enactment,” a PETA official said.

“The ministry’s decision to treat some wild animals as ‘vermin’ is an easy, but ineffective, way to deal with human-animal conflict as it does nothing to address the root cause of the issue,” another PETA activist said.

“It is a matter of great concern that such paper work alone decides the fate of overpopulated animals,” the activist told Down To Earth in an email interview.

Manilal Valliyate, director of veterinary affairs, PETA India, outlined some steps that the government must work on. These include restoring wild habitats, strengthening anti-poaching efforts and working with villages in critical wild animal corridors.

The World Wide Fund for Nature(WWF) has also shown its concern regarding such kind of conflicts in an article which states, “Conflict between people and animals is one of the main threats to the continued survival of many species in different parts of the world, and is also a significant threat to local human populations. If solutions to conflicts are not adequate, local support for conservation also declines.”