EU officials argue that while the ban on ivory trade is right for some countries, it shouldn't be all-encompassing. It has called on African range states to reach agreement on the issue 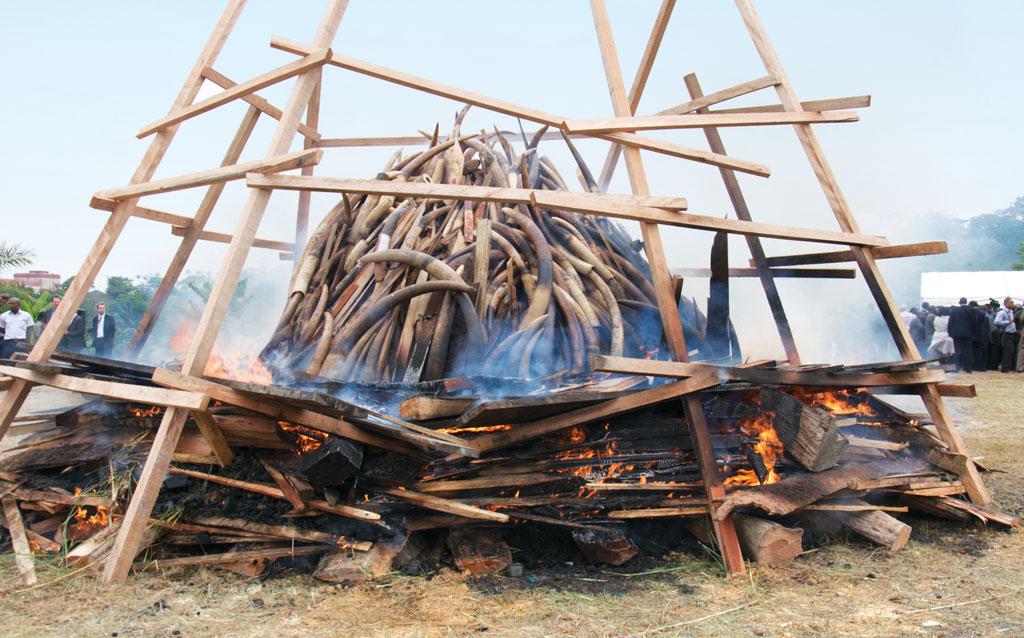 Kenya burned 105 tonnes of ivory confiscated from smugglers and poachers, an action denounced by Bostwana as wrong and wasteful (Credit: IFAW)

Opening skirmishes are taking place more than two months before a major conference in South Africa that will determine the future of ivory trade and elephant conservation.

Such conferences have since the late 1980s been the main battleground for the opposing camps. As such, the Conference of the Parties of the Convention on International Trade in Endangered Species of Wild Fauna and Flora (CITES)link in Johannesburg will be no exception.

The basic divide is whether the existence of a legal trade in ivory encourages further poaching or whether a regulated legal trade would serve to reduce incentives to poach. CITES voted in 1989 to put all Africa’s elephants on the list of most endangered animals, banning all trade in ivory between member countries.

The ban has remained at the insistence of East African countries, notably Kenya, with the backing of Western governments and international nongovernmental organisations. But it is a position that has been strongly opposed by southern African nations from the start.

A lot rides on the CITES conference in September, which will decide whether or not to extend the ban, which runs out in 2017. A recent decision by the European Union (EU) to back the southern African position for the first time could well tip the balance against the pro-ban lobby. The EU has 28 member countries.

Namibia and Zimbabwe have already petitioned CITES to exempt their elephants from the ivory trade ban. This is on the grounds that their populations are thriving. Income from legal stocks of ivory would generate income to improve conservation and anti-poaching efforts, they argue.

But this bid will be opposed by the 29 African range states that make up the African Elephant Coalition. Members of this coalition want a complete and permanent ban on ivory sales. They have gone further to demand the destruction of ivory stocks. Leading coalition member Kenya burned 105 tonnes of ivory in April this year.

But the southern African states do not belong to the coalition and even Botswana, which banned hunting in 2014 and has not applied to sell ivory, has vehemently opposed ivory burning. Botswanan President Ian Khama was in Kenya for an elephant summit in April but refused to attend the ivory burning ceremony, denouncing it as wrong and wasteful.

Botswana and other southern African nations all oppose a permanent ban on trading. They have long held the view that the 1989 ban has been a costly and unsuccessful experiment that has signally failed to stop poaching. Elephant populations have increased steadily in these states and now make up more than half the estimated 400,000 to 630,000 elephants remaining in Africa.

Ban on all ivory trading

The push against ivory trade started in the 1980s. It was led by East African-based conservationists and animal welfare groups alarmed by the massive wave of poaching that had started in the 1970s and continued into the 1980s. Between 1979 and 1988, elephant numbers fell from about 1.3 million across sub-Saharan Africa to less than 700,000.

The drastic fall was almost entirely due to poaching to meet massive demand in Hong Kong and Japan, among others. Ivory prices had increased tenfold between 1970 and 1979, reaching US$74 per kilogram. Prices in China – now the main market – are currently about $1,200 per kilogram, having dropped recently from $2,100.

The decimation of the African herd has led some conservationists and advocacy groups to demand a ban on all ivory trading. At first not a single African elephant range state agreed. Southern African states had growing elephant populations in contrast with East, Central and West Africa, where poaching was rampant.

CITES tried to introduce a quota system to control the trade. But this was poorly operated and failed to overcome the massive corruption that was involved in illegal ivory trading. It also enabled poached tusks to be passed off as legal ones.

Eventually, after Kenya and Tanzania were won over to the ivory ban camp, CITES voted in 1989 to put all Africa’s elephants on its Appendix 1 of most endangered animals and ban all trade in ivory between member countries.

This was opposed by the southern African states who inserted a caveat that they could apply to have their elephants downlisted in the future to Appendix 2. This would allow trade in ivory if agreed to by CITES. The 1997 CITES meeting in Harare sanctioned two one-off legal ivory sales in 1999 and 2008 at which Botswana, Namibia and Zimbabwe sold legal stocks to Japan and China. These stocks consisted of natural mortality ivory and ivory seized from poachers.

But some nongovernmental organisations argue that one-off legal sales have actually served to encourage further poaching. The evidence presented for this is weak, circumstantial and lacks any convincing causal link. Nevertheless, legal sales undoubtedly give a signal that the purchase of ivory is acceptable and so undercut attempts at demand reduction.

Pro-ban advocates like Kenya argue that the legal sales have encouraged trading and led to a surge in poaching in the early 2000s and the first three years of the current decade. But there are far more convincing arguments that the rising prosperity of China and its emergence as a huge market for ivory prompted the huge resurgence in poaching rather than one-off sales.

The major increase in killing for ivory led to the deaths of an estimated 100,000 elephants in 2010 to 2012. Poaching rates are still thought to be about 20,000 to 30,000 a year. The very heavy poaching occurs in southern Tanzania, northern Mozambique, and Central and West Africa.

What makes the September summit even more interesting and controversial is the decision by the EU to oppose a total global ban on ivory sales. The European Commission opposes an all-encompassing ban in a position paper on ivory released on July 1. The Commission says countries with growing elephant numbers should be encouraged to manage their populations in a sustainable manner. The sustainability argument has been a main plank of those arguing that the total ban is ineffective and counter-productive.

Extinction of the African elephant

As the current moratorium on all ivory sales ends in 2017, CITES will have to make a decision in September. In the past the EU has generally supported the ban and the moratorium on all legal sales. And so the anti-trade camp has responded to the new position with fury and shock.

One of the voices raised against the EU is that of Andrew Seguya, the director of Uganda’s Wildlife Authority. He told the Guardian:

If the EU prevents an Annex I listing, it will be the beginning of the extinction of the African elephant for sure.

What he failed to mention is that elephant poaching on a massive scale in the past five years has not taken place among the downlisted populations in southern Africa. He also failed to mention that Uganda has become a major hub for the smuggling of ivory from Central Africa to China and East Asia.

EU officials now argue that while the ban is right for some countries, there are good arguments for not having a total ban. The EU calls on the African range states to reach agreement on this.

But agreement has never been a word one could associate with the CITES elephant debates. The southern African states and the EU are in for a rough ride. Once more discussion is likely to be based on hyperbolic and emotive declarations from entrenched positions rather than constructive compromise.