Wildlife Research and Conservation Society accused of violations including straying from the core area of conservation, banding owl species without permission

The non-profit used methods to band the forest owlet that are stressful and harmful to the species. Photo: WRCS

The owl conservation efforts of a non-profit at a core area inside Maharashtra’s Melghat Tiger Reserve came into question after a forest department enquiry found violations in the work they conducted.

The forest department admitted violations of norms by the Wildlife Research and Conservation Society (WRCS), based out of Pune, over the conservation of the endemic forest owlet and other owl species, after a Right To Information (RTI) enquiry.

The non-profit had sought permissions from the state forest department to tag owls in Maharashtra’s Melghat. The approvals were sought for two projects:

Shubham Bardatiye, who worked as a project officer until March 2020 and Alkesh Thakre, a co-worker on the projects, complained to the state forest department in May. The Sipna forest division subsequently initiated an enquiry into the matter.

“The forest owlet is endemic to the forests of central India,” said Bardatiye. “The species is listed as ‘endangered’ on the International Union for Conservation of Nature Red List since 2018, with its population estimated to be less than 1,000 mature individuals,” he added.

The species was thought to be extinct for over 100 years until it was rediscovered in 1997 and then categorised as a Schedule-1 species under the Indian Wildlife (Protection) Act, 1972, for protection.

“The RTI reply received on August 4 only confirmed the violations by the non-profit,” he said.

Documentary evidence and RTI replies in possession with Down To Earth said WRCS sought permissions for radio telemetry of seven species of owls:

The non-profit, however, carried out the banding and re-banding of these species without permissions. A July 10, 2019 permit issued by the chief wildlife warden was for radio tagging 42 numbers of Schedule-4 species, while a permit for non-scheduled birds was issued for until June 30.

The radio-tagging permit, thus, did not include the forest owlet for research. The permit given for tagging forest owlets was due in July 2019. WRCS, however, worked till June 30 this year without authorised permission. 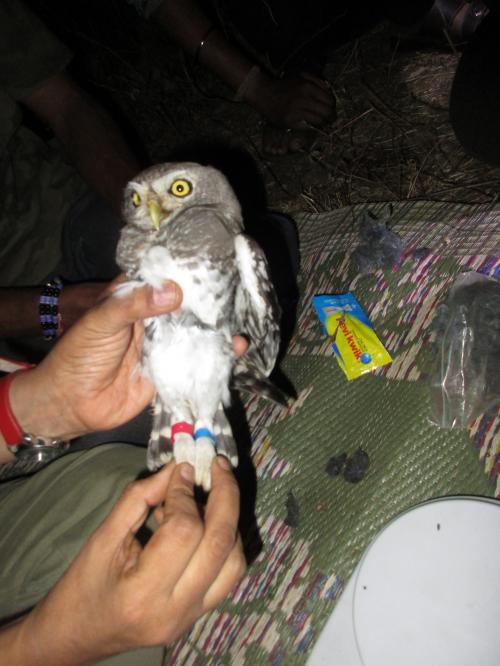 The forest owlet is strongly diurnal, which means it is active during the day and hunts in daylight. Photo: WRCS

Evidence showed more number of owls — than the permitted ones — were colour-banded. “More than 10 spotted owlets were banded against the approvals of seven granted by the department,” said Badratiye, a biology graduate.

“The map and areas from where the owls were captured also reveal the non-profit entered core areas, which is a violation,” he added.

The documents showed permissions were issued to work in the Chaurakund range reserve. A few instances of capture for colour banding in the Harisal range of Gugamal Wildlife Division — under the Melghat Tiger Reserve and next to Chaurakund range — were pointed out by the investigation officer.

Statements recorded by the forest department from former and existing employees Manish Dhakulkar and Shubham Giri respectively, showed the non-profit used an endoscope and methods — including using mice, chicks, gum and kerosene — to band and clean adhesive from owls. These methods are stressful and harmful to the endangered species.

No technical expert was present while banding the owls. Locals were roped in for the task. “Owls from most of the locations were severely disturbed due to banding and were never seen again,” said Thakre.

“The entire banding process should last only for 5-10 minutes, after which the owl should be released back to its habitat unharmed, according to protocol,” he said. “The duration of the banding, however, exceeded the protocol time limit between 30 and 45 minutes, exposing the bird to stress for a longer period,” he added.

The forest owlet is strongly diurnal, which means it is active during the day and hunts in daylight, according to Thakre. WRCS, however, banded it during the night at many locations, further disturbing its behaviour and exposing it to stress and exhaustion.

“Owl pellets — mass of undigested parts of bird’s food that some bird species occasionally regurgitate — were collected from the protected area without any authorised permit,” Thakre said.

Research permits granted to the WRCS did not involve the collection of samples from protected areas, according to Thakre.

Prachi Mehta, project in-charge and director at WRCS, however, refuted the allegations. “WRCS has been researching the forest owlet since 2005-06. Our research work on the forest owlet includes distribution surveys and habitat studies in Chhattisgarh, Gujarat, Madhya Pradesh, Maharashtra and Odisha,” she said.

Mehta said the allegations were false and denied WRCS violating the core area. The project was approved by the research advisory committee of the forest department, premier research institutes of the country and senior ecologists, according to her.

“Colour banding is a standard technique used all over the world for identifying individual birds,” Mehta said, citing training in colour-banding by international scientists and the following of banding guidelines used by national and international agencies.

“We underwent extensive training in banding and radio-tagging practices in the United States with scientists working on owls. The same procedures were followed in our work,” she added. The complainants attempted to discredit the work of the non-profit and malign its reputation, according to Mehta.

Badratiya, however, said his intention was only to highlight wrongdoings. “I worked with the non-profit for four years and was promoted from research assistant to project officer. I have been complimented on various occasions. Why would I try to malign its image?” he asked.

The chief of the state forest department, however, said WRCS did violate a few restrictions. “The inquiry revealed the non-profit did violate norms. There are ‘trivial deviations’ from the given permissions,” said Nitin Kakodkar, the principal chief conservator of forest.

Another forest official, however, said such offences were grave and must be taken seriously. “These owl species are endemic and forest owlets are hardly spotted in places apart from the core area. The incident is a pure disturbance of habitat,” the official said, requesting anonymity.

“Any violation of norms or even entering into the core area without permission holds ground under the hunting category according to the Wildlife Protection Act,” the official said. “How can this be allowed and a non-profit be insensitive towards it?” the official asked.

There was a reason why shoot-on-sight orders were imposed in Assam to protect the endemic rhinoceros, the official said. Similar orders are in place in Gujarat’s Satpuda range as well, where the habitat of these endemic owl species is violated, the official added.

Down To Earth has also published a rejoinder from WRCS.