The dead Desert Monitor Lizard that was found near Pokaran. It has died due to pesticides sprayed in the area to kill locusts. Photo: Sumit Dookia

The director of the Wildlife Institute of India (WII), Dehradun, has written on May 30, 2019, to the Chief Wildlife Warden of Rajasthan to stop the spraying of pesticides in Jaisalmer district, the last stronghold of the critically endangered Great Indian Bustard (GIB) globally.

On May 23, 2019, the District Magistrate of Jaisalmer had issued directives to the Locust Control Office to take effective control measures to kill locusts that have appeared in the district from the west. On the evening of May 23, the Locust Control Office staff acted swiftly and sprayed chemical pesticides in the villages of Loharki, Suzasar, Ramdeora, Amukhon ki Dhani, Khetolai and the Field Firing range of Pokaran.

In his letter, director V B Mathur wrote that the pesticide sprayed in the villages, Malathion could cause anorexia (loss of appetite) among the GIBs or kill them outright.

Besides this, he said, during its breeding season which has already begun, (April – October), the GIB “largely depends on protein-rich insectivorous diets including grasshoppers/locusts and beetles”. In fact, the bustards’ breeding activity is strongly correlated with the population bursts of grasshoppers/locusts. Such a protein-rich diet stimulate birds to display and nest. Further, the survival of chicks and juveniles largely depend on the availability of insects. “Thus, without adequate grasshopper/locusts in the environment, the breeding activity of Great Indian Bustard will be severely affected,” wrote Mathur. 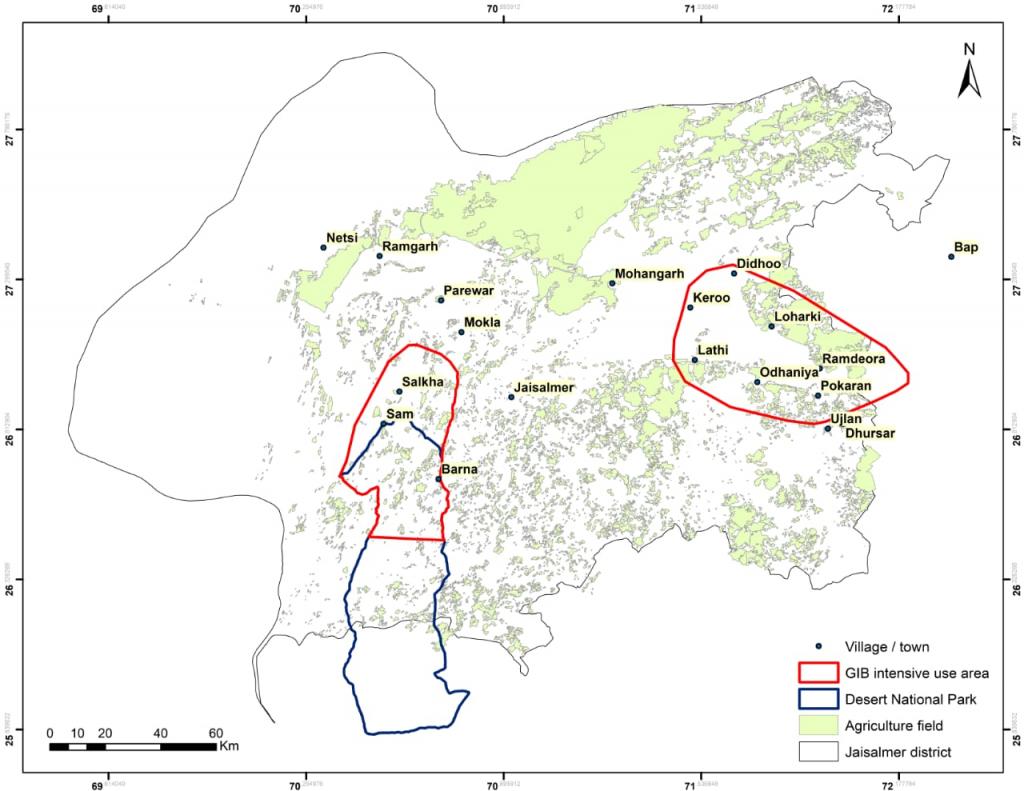 As a remedial measure, “spraying of pesticides should be strictly avoided in the identified intensive use areas of Great Indian Bustard, apart from all other areas where such activity is legally restricted”, wrote Mathur. The WII and Rajasthan Forest Department have already identified and mapped the GIB’s intensive use areas and overlaid them on agricultural areas. “The agricultural area identified for strict avoidance of pesticide use is less than 10 per cent of the total agriculture area in Jaisalmer. Farmers with existing crops in these areas can be compensated for their foregone production cost, based on appropriate quantification, as an incentive for not using such pesticides, using State Government funds such as CAMPA allocations,” he wrote.

Mathur also called for any Great Indian Bustard site that had already been sprayed with pesticide to be cordoned off by temporary fences, with patrolling teams to ensure that GIBs did not feed on toxic crops/ insects for a period of 15-20 days until the toxicity levels had reduced.

Meanwhile, the pesticides have claimed a first victim. A Desert Monitor Lizard, protected under Schedule 2, Part 1 of the Wild (Life) Protection Act, 1972, has been found dead near Pokaran. The population of this species is already very low, as it is only seen in the Jaisalmer-Jodhpur area.

Lion Cub and 3 rare primates rescued from smugglers in Kolkata

A lion cub along with three rare Southeast Asian primates were rescued from three langurs in north Kolkata in the wee hours of June 1, 2019. According to media reports, officials from a number of security agencies, acting on a tip-off, chased and intercepted an SUV on the Belgharia Expressway. The animals were found stuffed in nylon bags, the mouths of which were stitched. The three smugglers were arrested but managed to secure bail. The forest department will challenge the bail on June 3. According to officials, the lion cub is most probably African as the animals were bound for a private zoo in western India and coming from Bangladesh. Two of the primates are critically endangered adult white-headed langurs, found in Vietnam. The third is a juvenile and is also suspected to be a white-headed langur. All the animals are fine and have been handed over to the Alipore zoo.

‘One in a million’ albino magpie living in Tasmanian sanctuary

A young male magpie, has been found to be living in a wildlife sanctuary on the island of Tasmania, south of Australia. According to a media report, the bird was handed to the Trowunna Wildlife Park as a fledgling late last year after it was found in the wild at the base of a tree on which its nest was. The Park authorities soon discovered that they could not let him go as his unusual colouring would make him a target for crows and owls. They are also very sure that he is a genuine albino magpie and not a leucistic one as he has non-pigmented legs and beak and pink eyes. The chances of finding a genuine albino magpie are one in a million.

Wildlife groups and a Thai Member of Parliament (MP) have opposed the export of Thailand’s elephants, which has been recently resumed after a 10-year ban, according to a media report. The MP, Nikorn Chamnong, who represents the Chart Thai Pattana party, said the new regulations for the export of Thai elephants, which have been formulated by the country’s Ministry of Commerce, must be reviewed as they are unclear. He also said the ministry should not be not involved in any matter related to the issue. Wildlife organisations are also of the view that the Commerce ministry should not have been involved. That task should, instead, have been entrusted to the Thai Ministry of Natural Resources and Environment.