An official report on the inquiry into a seizure of animal parts in Uttarakhand’s Rajaji Tiger Reserve (RTR) last year, has named the director of the park and a number of other forest department personnel.

Bones, skins and flesh belonging to two tigers and two leopards were seized in the Motichur range of RTR on March 22, 2018, following which, the forest department filed an FIR under the Wild Life Protection Act, 1972, and an investigation was started under the Chief Conservator of Forests (CCF), Manoj Chandran. 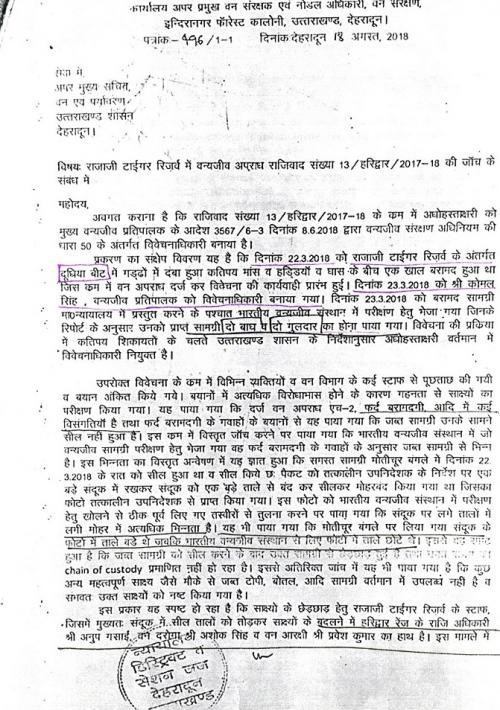 On February 13, 2019, the investigation report was submitted to the state government, the forest department, and the Dehradun Court of Judicial Magistrate as well as the Uttarakhand High Court, which is already hearing a case on tiger poaching in Uttarakhand.

The report, first submitted to the then forest secretary, Ranvir Singh on August 18 last year, sought his permission to charge the above mentioned officials, including Sonkar, under Section 197 of the Code of Criminal Procedure (Prosecution of Judges and public servants), for tampering with evidence.

“Instead of granting the permission, Ranvir Singh removed Chandran from the investigation and made the accused, Sanatan Sonkar the head of the investigation. The forest minister, Harak Singh Rawat, had to intervene and he removed Sonkar in December last year and removed Ranvir Singh from the position of forest secretary,” a highly-placed source in the Uttarakhand forest department said on conditions of anonymity.

The report found that the evidence sent to the Wildlife Institute of India (WII) was tampered with and pieces of evidence recovered from the crime site, like caps, were destroyed by Komal Singh. It further notes that Singh prevented other officials from participating in the inquiry being conducted by the CCF.

The investigation has also revealed that Singh tortured one of the victims using electric shock to get a false statement and therefore fabricate evidence. 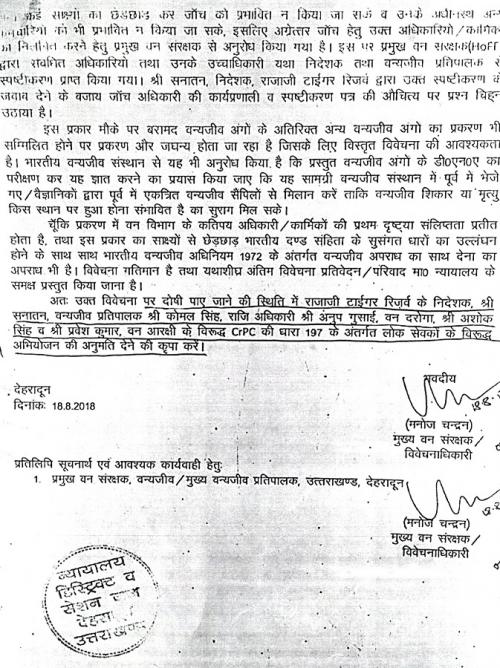 “We cannot rule out the fact that the director might have called in poachers to get the leopards killed illegally because the highest number of human deaths by leopards took place under this director,” says Rajiv Mehta, former honorary wildlife warden, RTR.

“Right now, there is no one who is heading the investigation. No orders for charging the people named in the report have come. I have given my report and if they want to act on that, they can, or if they want to do further investigation, they can do that too,” Chandran told Down to Earth.