Scientists are studying factors that may have affected their population 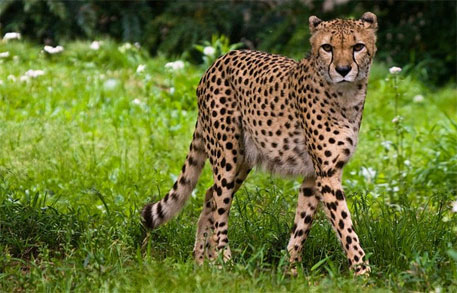 Cheetahs spend most of their energy looking for prey, walking up to 30 kilometres in the heat day after day. This was revealed by a study published in the journal Science last week.

Loss in grasslands, fencing that restricts free movement of animals and widespread hunting have caused the animal population to fall, thus reducing the availability of prey to cheetahs.

One of the aims of the study was to understand factors behind the sharp decrease in their population. Scientists measured energy expenditure in 19 free-roaming cheetahs in South Africa and Botswana for two weeks, injecting them with isotope-laden water and analysing their faeces.

"It is us humans that are going to be responsible for their dwindling numbers. We need to be even more careful to look after and maintain the remaining areas of the world that are truly wild, and we need to think about the consequences of our actions," Michael Scantlebury, biologist from Queen's University Belfast who led the study, said in a Reuters report.

Cheetah populations have declined from about 100,000 to 10,000 over the past century, according to experts.

The study also found that cheetahs require relatively less energy to chase and hunt prey at high speeds. They can go from zero to 96 kilometres per hour in three seconds, making their acceleration faster than most sophisticated cars.

"Our data suggest that they are indeed perfectly adapted to this hunting technique. They recover pretty fast, so the high-speed hunting doesn't really affect their quality of life," said Johnny Wilson, a biologist at the North Carolina State University and one of the researchers, in a Reuters report.

This finding is in contrast to the earlier assumption that cheetahs required an excessively large amount of energy to catch new prey, after predators like lions and hyenas had stolen the prey hunted by them.