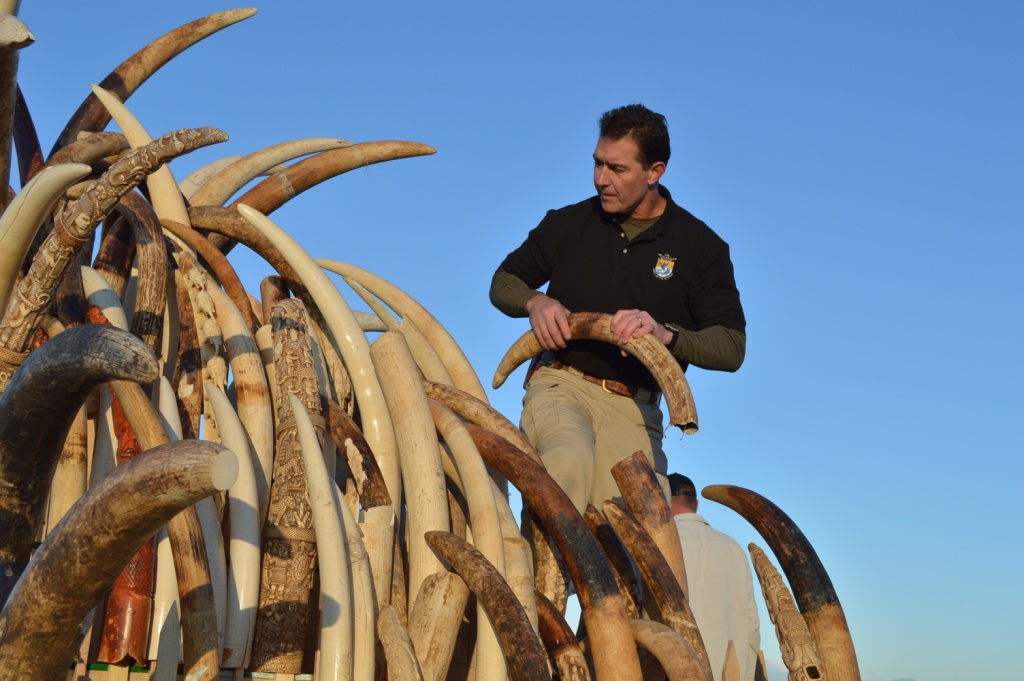 An official of the United States Fish and Wildlife Service assembles seized ivory to destroy it. Sri Lanka has now followed the US and 14 other countries in destroying illegal ivory. Credit: Flickr

Following in the footsteps of 15 other countries, the island country of Sri Lanka on Tuesday destroyed one-and-a-half tonnes of ivory, becoming the first South Asian nation to do so.

The ivory was from a single shipment of 359 tusks, seized by Sri Lankan customs authorities at the port of Colombo in May 2012 from a ship en route from the port of Mombasa in Kenya to Dubai in the United Arab Emirates. Had it not been impounded, from Dubai, the ivory would have been sent on to Thailand. Following a request of the Sri Lankan government, a team from the International Consortium on Combatting Wildlife Crime collected DNA samples from the seized ivory. Later, forensic analysis revealed that the elephants had been poached in southeast Tanzania and northern Mozambique.

The tusks were splintered using industrial crushers and the ivory shards were transported to an incinerator under military security, all this amidst chanting Buddhist monks apologizing to the dead elephants for the cruelty. According to official reports, it took seven hours to splinter the tusks. The ashes will be interred in the sea from the incinerator. The religious ceremony also saw the participation of Hindu, Muslim and Catholic leaders who delivered short statements about the environmental and social costs of poaching.

“I am relieved that it is finally happening and am thrilled at the buy-in from the president and prime minister. Sri Lanka is making a very strong statement by going ahead with the destruction with the support of the highest levels of government. This event will educate Sri Lankans on the gravity of global wildlife crime and its impact on their country. Culturally, the Sri Lankan public will never condone the slaughter of elephants,” said Manori Gunawardena, elephant scientist.

The move has been lauded by various organisations across the globe. “This brave decision by the Sri Lankan government is to be loudly applauded. Overwhelmingly, the world now recognizes that ivory belongs on elephants, and nowhere else. Today, Sri Lanka joins the growing number of countries taking bold action to deny wildlife traffickers their blood money and blaze a path for a future with wild elephants,” says Adam M. Roberts, CEO of Born Free Foundation.