When noise due to traffic increases, the birds alter the length and frequency of their song to improve communication 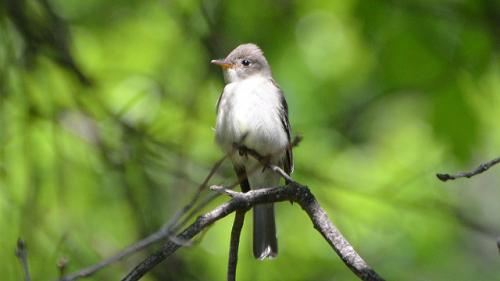 Traffic noise affects the behaviour of wild animals around the world in both terrestrial and marine environments. Researchers from the George Mason University, USA, recently studied the song patterns of the Eastern wood pewee, a small flycatcher bird distinguished most easily by its calls. They found when noise due to traffic increases, the bird alters the length and frequency of its song to improve communication.

Led by Katherine Gentry, the researchers recorded acoustic readings of the same group of pewees in two scenarios—when traffic and resultant noise was high, and during road closure and minimal noise.

When traffic noise increases, the birds were seen making adjustments to get their songs across, and with the closure of roads and decrease in traffic noise, songs returned to their natural state with broader bandwidth, lower minimum frequencies and longer duration.

Songs are essential in the process of mating, but traffic noise interferes with it. Increasing disturbance reduces the abilities of males that adjust their songs to attract a mate and defend their territory. Cutting traffic noise, for example through road closures, is one way of reversing this effect, the researchers say.

The Eastern wood Pewees, whose numbers have reportedly reduced by over 50 per cent in the last 70 years, are a migratory species. They are commonly found among urban parks in eastern United States, which makes their acoustic behaviour useful in assessing traffic noise disturbance.

Researchers say that while uniform reduction in traffic noise is ideal, other mitigation efforts, like routine road closures, are still very helpful since they reduce noise, no matter for a short period of time. The results of the study, researchers say, provide understanding of how birds respond to noise and noise reduction and are useful for constructing conservation plans.