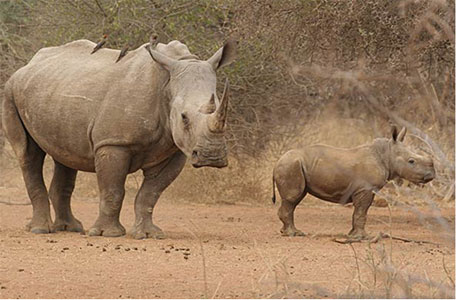 The South African government has started moving its rhinos to safer parts from Kruger National Park, after poachers killed 769 rhinos in the country this year.
Gerry Swan, chairperson of the South African National Parks conservation and tourism committee, confirms that 20 rhinos were moved to secret locations last week.

“We expect to translocate more rhinos out of poaching hot spots of the Kruger National Park by the end of October and on possible occasions in November,” Swan said in an email interview to Bloomberg. He adds that a greater number of rhinos will be translocated from the poaching hotspots within Kruger in 2015.

South Africa is home to the largest population of the African two-horned rhino. More than 1,000 rhinos were slaughtered by poachers last year. The government approved the relocation of white rhinos from the Kruger National Park to secret sites within and outside the country in August this year.

Rhino horns are in great demand in China and Vietnam and are believed to cure diseases like cancer.

According to Save The Rhino International, a UK-based conservation charity, South Africa had managed to contain poaching until 2006. From 2008, however, there was a sudden rise in demand for rhino horns and poaching grew significantly. Despite recent measures by the government to curb the menace, experts believe the country must ensure an increased number of arrests, prosecutions and stiffer sentencing for rhino crimes.