Wildlife board discovers it has no say

Though touted as a statutory body with teeth, the National Wildlife Board was tamed by Union minister for environment and forests T R Baalu at its very first meeting in New Delhi on October 15. Baalu allegedly thrust upon the board a decision to drastically reduce the compensation money the Oil and Natural Gas Corporation Limited was required to pay to carry out exploration in Rajasthan's Desert National Park -- home to the endangered Great Indian Bustard and other rare animals 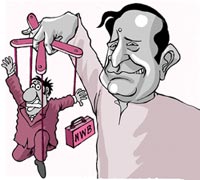 though touted as a statutory body with teeth, the National Wildlife Board (nwb) was tamed by Union minister for environment and forests T R Baalu at its very first meeting in New Delhi on October 15. Baalu allegedly thrust upon the board a decision to drastically reduce the compensation money the Oil and Natural Gas Corporation Limited (ongc) was required to pay to carry out exploration in Rajasthan's Desert National Park -- home to the endangered Great Indian Bustard and other rare animals.

The nwb was created under the Wildlife (Protection) Amendment Act, 2002, which Parliament passed in January 2003. The amendment reconstituted the Indian Wildlife Board, giving the new entity far-reaching powers. It is now mandatory for state governments, seeking to alter the boundaries of sanctuaries or national parks in their jurisdiction, to approach the nwb for prior permission.

When the bill was passed, many wildlife experts exuded confidence that the act would deter state governments from tinkering with protected areas to promote commercial and other vested interests. Before the amended legislation was enforced, state governments were authorised to take decisions with regard to protected areas. The first nwb meeting began with Prime Minister (pm) Atal Bihari Vajpayee, the chairperson of the board, waxing eloquent on the ministry of environment and forests' (moef) achievements and the board's creation. But Baalu, the board's vice-chairperson, showed his true colours when it came to taking tough measures.

The last item on the agenda was giving clearance to ongc for exploration in prime bustard land for six months. Earlier, the board had set up a sub-committee to quantify how much money the corporation should pay for mitigating possible impact of the corporation's activities in the region. The sub-panel had, in its report, pegged the cost at Rs 5 crore.

The corporation protested and went to the Supreme Court (sc) on the matter. The sc, however, ruled that only nwb was authorised to fix the sum. In the meantime, ongc began work at the site by making a conditional deposit of Rs 1 crore. The total was to be decided by the board at the meeting.

Several witnesses charge Baalu with bulldozing a much-diluted resolution through the meet, in utter disregard of the board's own sub-committee report and the views of many members. Consequently, it was decided ongc could get away by paying an additional Rs 1 crore only. Retired director general of forests and board member M K Sharma reveals: "The chairperson and vice-chairperson took the decision that the cost be put at Rs 2 crore." He stresses that the chairperson has "the full authority" to settle the matter. The minister's office later elaborated: "The pm had only one hour, so the moef had come with prepared resolutions on six of the seven issues on agenda. On the last item -- the permission -- the minister gave due opportunity to everyone to speak."

But those present claim Baalu steamrolled all opposition. He is said to have refused to let two board members -- Ravi Singh, head of the Indian branch of the World Wide Fund for Nature, and Dilnawaz Varyava of Bombay Natural History Society -- speak on the issue. The minister reportedly observed that ongc should "not be punished" for carrying out its task: "Once it strikes oil, it will be paying for the socio-economic development of the area. His office later said, " ongc should be asked to pay only if it strikes oil." Agrees Mohan Reddy, ongc's chief manager, public relations, "We should pay only if we hit oil and go in for extraction. But I am unsure to whom we had petitioned: the pmo or the moef."

Those present at the meeting disclose that there was a general consensus among nwb's state representatives about how a public sector giant like ongc could easily afford to pay Rs 5 crore. Baalu, however, took a brazenly contrasting stand: "A balance has to be struck between development and sustainability, and the need for development has to be kept in mind." According to some nwb members, he also usurped powers to nominate at leisure all the 10 members of the standing committee that will take the day-to-day decisions on behalf of the board.

This is not the first time allegations of using bullying tactics have been levelled against the environment minister. L M Nath, a member of the erstwhile Indian Wildlife Board, has contended in a petition filed in the apex court that the members had been threatened that the body would be dissolved if they did not give their consent to the Lower Subansiri dam project in the Northeast. Not only was the venture cleared eventually, the board was also dissolved. Nath alleges in his petition -- and amicus curiae Harish Salve concurs -- that the new board is packed with retired and serving bureaucrats. Notices have been sent on the petition to the parties.