Will India also get subjected to cold blasts if polar vortex weakens? 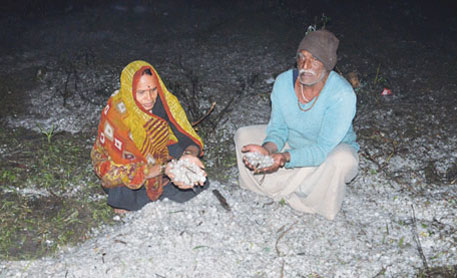 The southward shift of the polar jet stream earlier this year had triggered freak hailstorms in central and north India in February and March, putting an end to farmers’ hopes of a good harvest.  With prediction of the likelihood of icy Artic winds escaping southward again this winter, is India in for more freakish weather?

To find out the implications for India, we need to use long-range weather models like SINTEX F1 and CFS V2 for forecasting winter or any weather event beyond so many days from now, says Akshay Deoras, an independent weather forecaster based in Nagpur. But there is a large disagreement between the two weather models.

The SINTEX F1 model of Japan Agency for Marine-Earth Science and Technology (JAMSTEC), as initialised in October 2014, indicates warmer than normal winter in the Indian subcontinent for the winter period—December 2014 to February 2015. This model indicates that in this period, surface air temperature anomaly (warmer than normal) in entire India will be as high as (0.6°C to 0.9°C) with some pockets in western  Madhya Pradesh having an anomaly of 1°C or greater. This model has been showing the same forecast for December, January and February since early this year, so there is some consistency in the trends we are seeing, says Deoras. On the other hand, latest run (initialisation between October 1 and 10) of NCEP’s Climate Forecast System Version 2 (CFS V2) shows normal winter (no anomaly) for India in the same period. Interestingly, this model is also consistent since the last few months (normal winter). So, a large uncertainty looms. 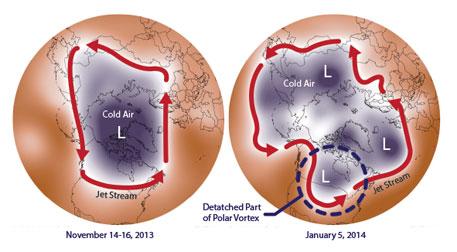 Slipping of polar vortex and the associated spread of cold arctic air is mostly restricted to high-latitude areas (countries like the US or continent like Europe) with some effect on mid-latitude regions. “Most of the Indian subcontinent being low-latitude region, I don’t expect any impact of shifting vortex in India (if at all it is to happen) and this was clear during the previous winter,” he adds. Excluding some pockets in north India, most of the places reported above normal temperature during winters (as per Climate Prediction Centre).

On the question of why there is a variation in the two models, Deoras explains, “both the models are coupled models—they work as per the modelling of atmosphere and ocean (as atmosphere and ocean respond to each other like a couple). SINTEX F1 model is a 27-member ensemble (which means 27 slightly different starting weather conditions are fed in the supercomputer which runs them and generates a forecast) whereas CFS V2 is a 16-member ensemble. Apart from this, there are some more reasons for the variations in their outputs connected to how these models run.”

Forecast for winter 2014-15
If there is a full blown El Niño, the winter in the Indian subcontinent is likely get warmer and drier than normal. The watch for El Niño formation continues and now most of the models say that it will form between October and December; so we will have to see how this shapes up in the coming period, says Deoras. As of now, a normal winter for the Indian subcontinent has been forecast but the forecast is subject to change as more data arrives and the picture becomes clearer. However, it looks like November 2014 will be warmer than normal for central India as per CFSV2.

The main source of snowfall in India during the winter is western disturbance (extra-tropical cyclones originating in the Mediterranean). The jet stream (river of air flowing at highest altitudes of the troposphere) is responsible for bringing them to north India. But the path of this jet stream changes as per El Niño’s strength and position in the Pacific Ocean. Hence once the picture of El Nino becomes little clear, it will be possible to estimate the snowfall forecast for India. Model wise, CFS V2 doesn’t expect any anomaly in the precipitation for north India but SINTEX F1 suggests higher than normal precipitation for Jammu and Kashmir in December-January-February, says Deoras.

Winter temperature and precipitation trends in the Siachen Glacier