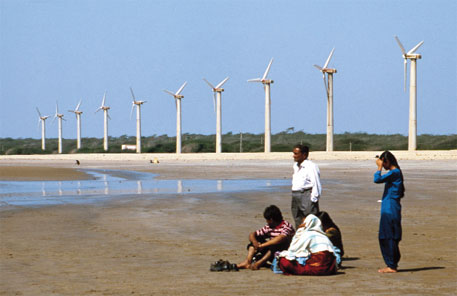 WIND energy sector has registered slow growth in the first quarter of this financial year, in sharp contrast to the past year’s growth. The capacity addition in the sector was about 100 MW less than last year during the same period. What’s more worrisome is that in Tamil Nadu, the windiest state, capacity addition has fallen by more than half while Rajasthan has witnessed a drastic decline in the first quarter of the financial year 2012 (see table). The Union Ministry of New and Renewable Energy (MNRE), however, is satisfied with the figures. It says with time the capacity will improve.

The industry has been voicing concern about the grim situation for quite some time now. MNRE, therefore, organised a roundtable on August 1. The industry gave various reasons for the decreasing capacity addition. Withdrawal of generation-based incentive (GBI) and accelerated depreciation (AD) schemes emerged as the main reasons. 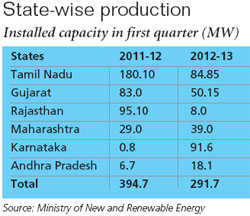 MNRE had introduced GBI in 2009. Under this, 50 paise was paid for every unit of electricity fed from a windmill to the grid over and above the feed-in-tariff a utility paid. Feed-in-tariff is the high rate that the government gives developers to promote clean energy. The GBI scheme was in addition to the government’s promotional scheme, AD, launched in the 1990s. AD allowed companies investing in wind farms to save about 80 per cent of invested capital in the first year.

GBI lapsed in March 2012 and was not renewed. The Union finance ministry withdrew AD saying people were investing in wind farms only to avail tax benefits. “Though AD was the main driver for the sector since 70 per cent of wind energy addition came from this scheme, it also led to installation of poor quality wind farms. We lost prime wind locations in the country because of this,” says an MNRE official who wished to remain anonymous.

The other reasons for the decline in installed capacity are state specific. In Tamil Nadu, the state-owned utility has not paid the wind power producers their dues for more than a year. Tamil Nadu Electricity Board only recently started clearing the dues. “Of the Rs 1,500 crore due, Rs 700 crore has been paid,” says G Rajagopal, director (finance) of Tamil Nadu discom. Payments in Rajasthan are delayed because the state-owned utility has Rs 45,000 crore debt. “This uncertainty has made the banks reluctant to finance wind energy projects,” says an industry source.

But MNRE is unfazed. “We accept that this year’s capacity addition will be lower than that of last year. But with AD gone, we are sure only serious players will enter the sector,” says the MNRE official. “We are happy that 291.7 MW addition in this year’s first quarter is by serious players only,” he adds. The capacity addition in 2011-12 was abnormally high because the industry was rushing in to install wind farms as AD was to be withdrawn by March this year, he explains. “To encourage serious players, we are holding talks to bring GBI back soon,” he adds. MNRE sources say developers with capacity of 150 MW are ready to feed into the grid but are waiting for GBI to be renewed.

The MNRE official, however, says that attributing fall in capacity to the withdrawal of AD is not right. “If this was the case then why was the installed capacity in the first quarter of 2010-11 only 203 MW?”