Wind power: up, up and down 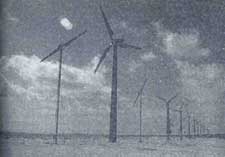 THE POTENTIAL for wind energy in India has been separately estimated at 30,000 megawatts (mw) -- by the Department of Nonconventional Energy Sources (DNES) -- and 50,000 mw -- by the Tata Energy Research Institute (TERI) in New Delhi. According to Jami Hossain, wind energy technologist at TERI, "Wind power can supplement upto 25 per cent of our electric power requirements, if the full potential is realised."

But the poor performance of the government, with a capacity addition of a little over 10 mw during 1990-92, indicates that even its scaled-down target for wind power generation, 200 mw from the original 500 mw by 1995, is impossible. Today, experts at the Bharat Heavy Electricals Limited (BHEL), the largest manufacturer of wind turbines in India, contend that touching even 100 mw would be a significant achievement. Private investors in wind power systems believe that 50 mw would be a more realistic target.

The DNES initiated a wind farm demonstration programme in 1986. The department reports that wind power generation capacity multiplied from 2.2 mw to 37 mw during the Seventh Plan ending 1990, and 70 million units of electricity were fed into the respective state grids from wind farms. By 1992, the total installed capacity stood at 38.31 mw, while an additional 12.47 mw was under implementation.
Wind farms are modular which makes it suitable for any capacity requirements. They also do not use any water for cooling as do thermal or nuclear plants. This, in the context of severe power cuts and the rising cost of diesel-based captive power, has made it attractive to the private sector.

Wind energy is harnessed on an experimental basis for wind pumps, wind battery chargers, stand-alone wind electric systems, and grid connected wind farms. More than 2,500 wind pumps and wind-diesel or autonomous systems with a capacity of approximately 200 kw have been installed throughout the country.

An indication of the viability of wind farms have come from Gujarat and Tamil Nadu with the introduction of a system of "wheeling and banking" (generation and storage) whereby private investors can set up wind farms and feed power to the grid and draw from it at a later date according to their requirements.

"The wheeling charges (the price at which state electricity boards buy the power from wind farms) -- Rs 1-1.25 a unit -- makes it an unviable proposition," according to Rajiv Bakshi of Vestas-RRB India Ltd. Our unit cost is about Rs 1.60 to 1.70."

Tamil Nadu has the highest installed capacity, while Gujarat has the highest number of wind power units. The Gujarat coastline is relatively cyclone free, unlike the eastern coast of India. Himachal Pradesh, too, has a high potential, but the hilly terrain makes exploitation of this potential very difficult.

In 1990, GEDA commissioned the 10 mw Pavanshakti wind farm at Lamba on the Gujarat coast, the largest wind farm in Asia. The wind farm was installed by Vestas-RRB India Ltd.
According to TERI technologists, the rapid growth of wind energy generation is curbed by the few number of organisations available for feasibility studies and potential assessment. TERI and the Consolidated Energy Consultants of Bhopal are the leaders in this area.

However, S M Kumar, deputy general manager at the BHEL Corporate R & D division in Hyderabad, identifies finance as the major constraint. "Subsidies are being curbed in several renewable energy programmes, and wind energy too has suffered," he said.

Also, the wind power systems, especially the smaller units, are very poorly managed. Kumar says, "Wind electric systems would be ideal for electrifying rural areas. However, only by privatising the wind generators can this energy alternative become viable. A Central agency will not work: maintenance would be neglected, theft and vandalism would take their toll on the machines."

The capacity to manufacture wind energy generators is also very limited. Initially, BHEL installed 55 kw generators with a high degree of indigenisation. It is presently manufacturing 200 kw generators. A 200 kw prototype is soon to be installed at the Kayathar wind farm in Tamil Nadu. "We are the only ones in the industry who are aiming at total indigenisation. At present, we are importing only propeller blades," says Kumar.

However, critics point out that "BHEL has made a disaster of the wind energy programme: its generators burn out, the projects far exceed the stipulated gestation period and budgeted costs. DNES overlooks BHEL's shortcomings, but metes stepmotherly treatment to private sector manufacturers," says a DNES official.

Ajit K Gupta, director of DNES' Solar Energy Centre, claims that "in the Eighth Plan, sufficient demand will be created for at least five manufacturers to take up production of wind energy generators."

There are serious lacunae in DNES' monitoring methods. A case in point is Andhra Pradesh, where the DNES sanctioned 150 water pumping windmills in January 1987 at a cost of Rs 23.59 lakh. The project was to be completed by September 1987. In June 1989, the department was told that only 77 windmills had been procured, and of these, only 67 had been installed. In a subsequent review of the project, only 29 were found functioning.

According to a renewable energy technologist, who requested anonymity, "DNES is ill-equipped to promote the wind energy programme. It has no testing facilities or certification standards. Such an approach will kill the technology in its infancy."

Bakshi says, "There has to be a liberalised approach to promoting this new source. State electricity boards place conditions without any knowledge of the intricacies of this technology. To become viable, installation of 200 mw farms must be allowed."

Of the 38 mw exploited so far, as much as 20 mw is directly with Danish assistance; Indian technology has accounted for only about 15 mw.

There is still a dependence on imported components. Bakshi says, "We have been trying to indigenise. RRB imports only the propellers, as these involve a very high level of reinforced fibre glass technology."

Economics still favours windpower. Nanubhai Amin, chairperson of GEDA says, "It is not really necessary for people to pay a high price for renewable energy. What is needed is that the price of energy from fossil fuels should be fixed at its real cost. Out of the total provision in the Seventh Plan of more than Rs 58,000 crore for the energy sector, only a little over Rs 510 crore (less than 1 per cent) was allocated for the development and use of non-conventional energy sources."