For a clean energy economy

SOLAR cell technology has claimed most scientific minds in the sector dedicated to alternative energy sources.

Ever wondered why wind power does not kick up as much storm? It is free; no expensive technology is involved. Terrains inaccessible by the village’s main electricity grid need to set up their own wind turbine and behold the benefits of a clean source of energy. The problem is wind is a source of power that fluctuates. 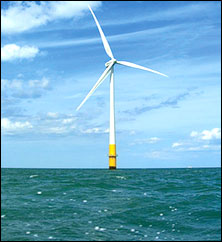 Willett Kempton’s team from the Centre for Carbon-free Power Integration at the University of Delaware in the US have figured a way to get wind energy to rise to fame. Tapping wind energy translates to a global wind resource from surface winds of 72 terawatt (TW) which is nearly five times the 13 TW global demand for energy.

The research spanned five years. Eleven wind stations distributed over 2,500 km along the east coast of USA were chosen. The wind turbines were interconnected by a submerged high voltage transmission cable. The power output for each hour at each site was calculated—two-thirds of the off-shore wind power could provide electricity, light-vehicle fuel and heat to buildings from Massachusetts in the northeastern US to North Carolina in the south.

“Each individual wind power generator site exhibited the expected power ups and downs. But when we connected all the wind turbines via a transmission line, the system averaged out the fluctuations and produced steady power during the course of the study,” said Kempton. The paper was published in the April 20 issue of Proceedings of the National Academy of Sciences.

Wind energy experts in India are sceptical. “The proposed system requires a minimum regular flow of wind to produce steady power,” said T S Bhatti, professor at the Centre for Energy Studies in IIT, New Delhi. Fluctuations here are very high coupled with periods of no wind at all, he added. Kempton countered the argument: “Since the power system is set up to adjust to unexpected failures of generators, fluctuations would be taken care of. Even if one windmill came to a halt, the others would keep running.”

There are studies that show interconnecting far-spaced wind generators yield greater benefit. Proximate stations are likely to experience similar weather at the same time. “But longer the distance, higher are chances of unsteady power,” said Bhatti. Voltage also goes down in a long-distance line. The transmission wastage in India amounts to 20- 30 per cent of energy, added Bhatti.