The year 1998 saw a record production of wind energy 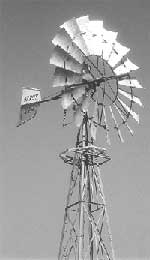 wind energy is considered to be the world's fastest growing energy source. And why not. It generated a record 2,100 megawatts (mw) of power in 1998. This was 35 per cent more than the previous year, according to a study conducted by Christopher Flavin of the Worldwatch Institute based in Washington, dc, usa .

With worldwide sales of nearly us $2million in 1998 alone, wind power has also become a lucrative business. This, in turn, means more employment opportunities, a relief to nations where job opportunities are dwindling.

The new wind turbines will be generating approximately 21 billion kilowatt of electricity every hour in 1999, enough for 3.5 million suburban households. The 1998 boom was led by Germany, which generated an additional 800 mw of energy. The country was already generating 2,000 mw of energy every year.

Given the fact that the industry is only seven years old in Germany, this is a remarkable achievement. In the windy northern state of Schleswig Holstein, wind now meets 15 per cent of the electricity needs. Germany now produces wind energy equal to what is produced by the country's largest coal-based power plants.

Spain has also emerged as a major player. It added 395 mw of wind power, pushing the country's overall capacity to 850 mw. In the northern industrial state of Navarra, 23 per cent of the state's electricity already comes from wind turbines. Wind power installations also grew rapidly in the us in 1998, with an additional 235 mw across 10 different states. The surge in the us wind investment, the largest since 1986, was spurred by efforts to take advantage of a wind energy tax credit that is scheduled to expire in June 1999. The largest projects are a 107 mw wind farm in Minnesota and a 42 mw in Wyoming.

The country's wind energy companies have also become leading exporters, accounting for over half the new wind turbines installed worldwide in 1998. Danish companies have also started joint venture projects in nations such as India and Spain. Developed countries have taken the lead in using wind energy to meet their electricity requirements. However, developing countries, where power demand is growing rapidly and the supply of fossil fuels is limited, there has not been much progress on this front.

Among the developing nations, India is leading with over 900 mw of wind power. But, in the last two years, wind energy sector has not seen much progress as the tax benefits, which were enacted in the mid-1990s, have been slashed.

The dramatic growth of wind power in the 1990s is primarily due to supportive policies enacted by the governments in countries such as Germany and Spain. These policies have established a stable market for the new industry, and have overcome the resistance of coal and nuclear-dependent utility companies to the new competition. Accelerated growth of wind energy is likely to take place in 1999. Spain and the us are expected to have particularly good years. They may exceed 500 mw of new turbines each. Wind power has already reached economic parity with coal-based electricity. And as the technology continues to improve, further cost declines are projected, which could make wind power the most economical and environmental-friendly, source of electricity in many countries in the coming decade.