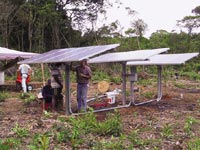 Researchers at the us-based University of California, Berkeley, have suggested a new formula for job generation: investing in renewable energy -- solar and wind -- as well as the use of municipal and agricultural waste for fuel instead of fossil fuel.

In their study, Daniel Kammen, Kamal Kapadia and Matthias Fripp of the varsity's Energy and Resources Group considered both direct and indirect job creation. The first category included sectors such as manufacturing, delivery, construction and installation, project management and operation, and maintenance of different technology components or power plants. The second category comprised jobs induced through multiplier effects. Installing wind turbines, for instance, would be a direct job, while employment generated in the manufacture of steel used to build the turbines would come under the indirect job category.

The researchers then calculated the jobs created by investing in renewable energy sources, as against fossil fuel. It estimated that as many as 2,40,000 new jobs could be created by 2020 through the former, as against a mere 75,000 jobs via the latter.