Winner takes it all 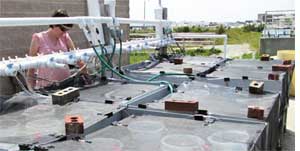 In a fight for food, consumers will win. The cost will be heavy

as global warming continues, a duel is likely to develop alongside. It will be played in the food web with food producers and consumers. In an unabated struggle over food, two factors--temperature and nutrient availability--will decide the winner.

A trio from the University of North Carolina and Institute of Marine Sciences in North Carolina, usa, created an artificial food web that replicated the light, air, temperature and nutrient levels found in the marine food web. The duel was between phytoplanktons (producers) and zooplanktons (consumers). The populations of both were measured before and after the duel. Temperature and nutrient availability were the parameters considered.

As the duel progressed, the team saw that warming and availability of nutrients was in favour of the consumers.The phytoplanktons produced more food and their numbers rose. The number of zooplanktons that fed on the phytoplanktons, also increased; they won but at the cost of the producers, leading to a dire food shortage.

Such a situation was predicted earlier. Warming favours photosynthesis as phytoplanktons produce more food. But the subsequent rise in the number of zooplanktons is disproportionate. This is because warming affects metabolic processes like respiration such that it favours more growth of consumers.

In a real food web, several players exist and so the duel is also decided by various factors. More studies are needed to predict the response to increase in warming which might be as much as 4C by the end of the century, according to the Intergovernmental Panel on Climate Change. The study was published in PLoS Biology on August 25.