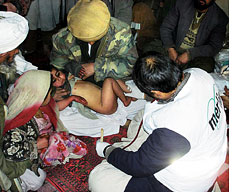 As parts of Afghanistan are facing the harshest winter in 25 years, 882 people have died since December as a result of sub-zero temperatures, snow and cold-related respiratory diseases, the Afghanistan National Disasters Management Authority said on February 14.

Over 170,000 patients with pneumonia and other acute respiratory infections have been treated at health centres across the country; about 100 of them, mostly children from Badakhshan province, died. More than 90 people have had their limbs amputated because of frostbite. Over 730 houses have been destroyed and nearly 135,000 livestock have died as temperatures dipped to minus 30oC in the first week of February. The country is still under the national public health emergency declared on January 8 and about 19,000 volunteers have been asked not to go on leave until the emergency is over.