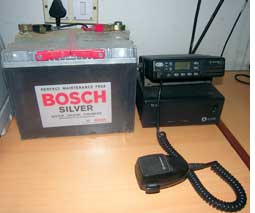 ABOUT 300,000 fishermen living along the coast in Orissa will benefit from very high frequency (vhf) wireless radio sets to be set up in their villages starting April. These devices will keep them updated on cyclone warnings issued by the Indian Meteorological Department.

The reasons for providing people with such sets are two: one, the Orissa coast is vulnerable--15 per cent of the severe storms in the Bay of Bengal affect the coast; and two, there are several tiers through which a cyclone or storm alert reaches people and often it gets delayed.

"Communication is okay up to the block level. The problem begins after that, when villages and gram panchayats have to be informed," said Prabhat Ranjan Mohapatra, coordination manager of the Orissa State Disaster Mitigation Authority (osdma), the nodal agency for the project. The vhf sets are expected to bridge this problem of 'last mile connectivity'.

For distribution of vhf sets, the Orissa disaster mitigation authority has prepared a list of 978 villages two to five km from the coastline, in six high-risk districts of Ganjam, Puri, Jagatsinghpur, Kendrapara, Bhadrak and Balasore.

Other plans include vhf sets for field officers in vulnerable areas. Eight repeater stations will also be provided for villages more than 40 km from the block headquarters. A repeater station is used to send messages to greater distances. Officials of the state disaster mitigation authority said the vhf sets would have a range of about 60 km if there were no obstructions between the transmitting and receiving stations.

The sets would be used to convey disaster warnings and to receive feedback from villagers, said Mohapatra. They are 'press-to-talk' sets that are easy to handle and villagers can be trained to use them. Each set is likely to cost Rs 25,000 and will have battery, a power unit and a two-way inbuilt radio.

Officials said the entire cost of the sets and tranmission towers will be borne by the Centre with aid funds.