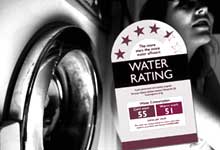 australia has introduced a labelling and standards scheme for domestic water-using appliances, the first of its kind in the world, which can be an example for India's water guzzling cities. The Australian parliament passed the Water Efficiency Labelling and Standards (wels) Act in the first week of February 2005. Under this law, appliances will get efficiency ratings on the basis of their water consumption and these would be indicated on their labels. The law also imposes a water efficiency standard of 5.5 litres for toilet suites.

"This will help Australian families make informed decisions about which appliance to purchase and the water savings that are possible. By implementing the scheme, Australia expects to save more than us$600 million in water and energy bills by 2021," says Ian Campbell, Australia's minister for environment and heritage. By 2021, Australia plans to save water at the rate of 230 million litres per day (mld).

The idea for wels came from Australia's mandatory energy efficiency labeling system for refrigerators and freezers. wels targets household fixtures and appliances like showerheads, washing machines, dishwashers, toilets, taps, and urinals. Water efficiency labels will appear on these by late 2005. Once a product is registered under the scheme, compliance will be obligatory. But it is not clear whether already existing houses will have to switch over to water efficient devices. Government estimates say about 50 per cent domestic water consumption is by toilet and shower devices, 34 per cent by gardening tools and 12 per cent by washing machines.

Sixty four per cent of the country's 19.2 million people live in cities and consume 350 litres per capita per day (lpcd) water. This is about 30 per cent higher than the average of countries in the Organisation for Economic Cooperation and Development (oecd). Australian states had already initiated water saving programmes comprising mandatory restrictions and disincentives like high water prices. Victoria's capital Melbourne introduced a four-level restriction corresponding to water content of its reservoirs. South Australia and Sydney also imposed similar limits. But domestic water use still increased in all cities, except Perth and Canberra, according to a 2002 study by the Senate Environment, Communications, Information Technology and the Arts References Committee. Recurring droughts and changing rainfall pattern has further aggravated Australia's woes.

wels is also crucial in that it fulfils the requirement of some existing regulations that were ineffective due to non-availability of suitable products. An example is the plumbing regulation that requires installing 6/3 litre dual flush toilets in all new work.

The standard water consumption for India's urban areas has been fixed at 135 lpcd. But in Delhi, which has highest water consumption, there are areas using over 500 lpcd water . What's worse, instead of promoting indoor water saving, the administration plans to "improve" water supply from 211 lpcd to 363 lpcd by 2011. A delayed water pricing decision, that could have regulated consumption, ran into a political controversy. No water use norms exist in the country for indoor appliances. Building codes also don't specify any such norms for toilets or taps. Both the government and people must realise the need for water efficient devices. Half of Australia's water savings will come from efficient washing machines. While the use of these machines have increased in India, water consumption has never been the criteria for their popularity.

Australia has a long way to go before its water problems end. Domestic water use comprises a mere eight per cent of its total water usage: agriculture uses 70 per cent and industry 20 per cent. But wels and the states' laws brighten up things for at least one sector and this is India's lesson.