Wising up after the quake 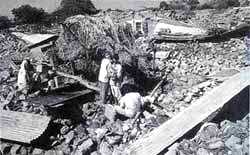 In the wake of the Latur earthquake, to make sure it doesn't get caught on the wrong foot once again, the Central government plans to set up a network of seismic stations. The Rs 100 crore technology mission will create a databank by establishing seismic observatories and cyclone warning centres, in peninsular India in particular. Besides, seismic zoning maps will also be revised; the present ones place the Deccan plateau in Zone I -- the most stable region.

The technology mission will set up 37 stations in the Deccan to monitor seismic activity. These will have advanced digital equipment to detect tremors. Minister of state for science and technology P R Kumaramangalam pointed out that the data would be useful to engineers for building quake-resistant buildings in the region.

Though the country's premier earthquake research centre, the National Geophysical Research Institute (NGRI), has not offered any explanation for the Latur earthquake, the technology mission has set up a four-member committee, under former department of mines secretary B K Rao, which will investigate the increased seismicity in the Deccan, assess the scientific infrastructure used to study quakes and probe the extent of coordination between earthquake monitoring agencies.

Meanwhile, a new threat has cropped up in the villages affected by the recent earthquake. Vast amounts of harmful chemicals are being sprayed by officials to prevent disease outbreaks from rotting corpses and against mosquitoes. Says Gojum Gunde, additional district health officer, Latur, "Each house in the 52 affected villages is being sprayed with at least half a kg of DDT, which is carcinogenic in the long run. Where mosquitoes have become resistant to DDT, the even more harmful Malathion is being used."