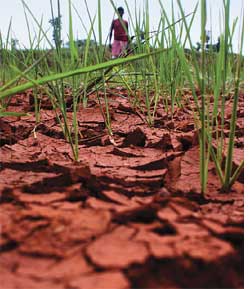 Even though IMD will declare a drought confirmation later in the year, the unofficial drought continues to exist.

The threat of one of the worst droughts looms large over India. The India Meteorological Department declared that the country as a whole received 43 per cent less rainfall till July 11, 2014. The average amount of rain received from June 1 to July 11 in the country is 216 mm, but this year average rainfall received is only 147.8 mm.

Regional disparities in rainfall make it worse for some areas. Central India received 61 per cent less rainfall this monsoon. The region covers states like Madhya Pradesh, Gujarat and parts of Maharashtra that produce a major chunk of food grains for the country. There are numerous reports of farmers facing ruination after taking hefty loans to sow crops and rains failed.

The season could get worse than the previous drought year, 2009. In that year, July rainfall was only 4 per cent less than the long period average (LPA). With such scanty rainfall till now, and no signal of things improving, July will be another month of extremely low rainfall.

Even though IMD will declare a drought confirmation later in the year, the unofficial drought continues to exist.

“The signs are that this will be a drought year. We need immediate measures to ensure that people get food to eat and a shelter to live in,” said an official of Ministry of Earth Sciences, who monitors monsoon on daily basis.

North-west India got 52 per cent less rainfall. In the last two weeks, the situation in east and north-east has deteriorated too. Till June 25, the area got 14 per cent more rainfall than LPA. But now, due to deficient rainfall, the region received 24 per cent less than the LPA for the duration. Peninsular India had received 35 per cent less rains than LPA.

“July is the main month of sowing and growing of agricultural material. If the rains continue to be low, availability of food will be an issue,” said B P Yadav, spokesperson, IMD.

He said that out of 36 meteorological subdivisions, rainfall has been deficient in 24 subdivisions, excess in six and normal in six. 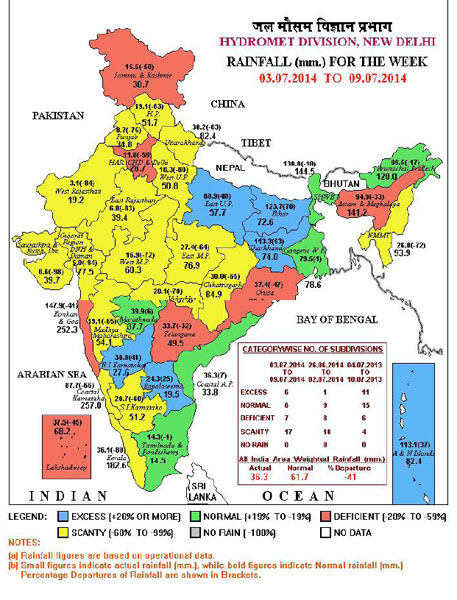