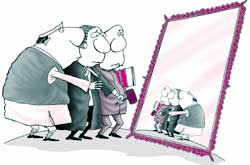 "Independence must begin at the bottom. Thus every village has to be self-sustained and capable of managing its affairs". The whole troubled question of rural employment and migration, discussed substantially by Mahatma Gandhi, is yet to be resolved or addressed meaningfully by successive governments. The National Democratic Alliance (nda) government's defence expenditure was Rs 12,059.80 crore but agriculture and allied sectors was allocated a mere Rs 40.4 crore (in 2004-05). The United Progressive Alliance (upa) had prioritised rural jobs in its pre-election objectives, but no real progress has been made so far.

Why do well-intentioned plans get routinely derailed in the maze of policymaking and bureaucratic practice? A look at the Citizens Report on Governance and Development 2004 by Social Watch India might reveal some insights into the functioning of the Indian state, regardless of who holds the reins.

Social Watch India, a network of citizen's groups and civil society organisations, comprises such groups as Centre for Youth and Social Development (cysd), Samarthan (Centre for Development Support) and National Centre for Advocacy Studies (ncas). Social Watch seeks accountability and "attempts to monitor institutions of governance and their commitment towards citizens and principles of democracy, particularly with reference to the marginalised sections".

In four interesting, fact-filled sections, the report reviews the performance of the state with a citizen's eye. It looks at Parliament (Seeking Accountability), the impact of policies (Broken Promises), the judiciary (Access to Justice) and aspects of local governance (Grassroots Democracy). How does the functioning -- or lack of it -- of these institutions affect the people on the ground and what needs to be done to keep them more practical, effective and accessible to citizens?

For instance, could the migration pattern from rural India to cities in search of jobs have been different had the government spent more on the rural sector? Rural development expenditure declined from 14.5 per cent during the 7th Five Year Plan to 6 per cent in 2001. Employment growth in rural areas during the same period shows a sharp decline. The annual growth rate of employment declined generally in the 1990s but the fall in employment in rural India was from 2.03 per cent to 0.58 per cent. In the second half of the 1990s, the employment availability in agriculture almost dried up due to reduction in public development expenditure, declining input subsidies and rural credit. Gross capital formation in agriculture also declined and per capita food grain output declined in absolute terms. Thus, rural livelihood opportunities were severely curtailed. Even the proposed Rural Employment Guarantee Bill, with much of its original potential diluted, may not turn the tide. Rural outlays suffer from a crunch in finances. Conversely, the cost of the business of Parliament is estimated to be a staggering Rs 18,430 per minute, disruptions of which amount to arrant wastage of public money.

Yet, our parliamentarians seem to have no qualms, given that the average sitting of Parliament has been falling since 1988. From 1952 to 1988, the Lok Sabha sat for over 100 days each year (125 days in the Nehru era). In 2003, the number of sittings fell to as low as 74 as the Lok Sabha lost over 60 hours due to disruptions. In turn, the nation lost Rs 66,348,000. At the launch of two new channels for the live telecast of parliamentary proceedings (to cost Rs 120 crore annually), leaders hoped for a more responsible Parliament.


In the absence of an effective executive, the judiciary has of late come to be seen as recourse. But the judicial system itself is struggling under the weight of archaic laws, delays and dysfunctional courts. While the Supreme Court managed to reduce its pending cases from a lakh plus to 20,000 cases through systematic measures, pending cases in high courts rose from 26.51 lakh in 1993 to 35.55 lakh in 2001.


In its second avatar, the Citizens Report 2004, continues the process, begun in 2003, of public scrutiny of governance and development. Spanning the gamut of public institutions, ranging from panchayats to Parliament, the report is an opportunity for the evaluation of governance by the people. Jagadananda, cysd, finds that "social watch can achieve what the government has been evading: accountability." Rajesh Tandon, Participatory Research in Asia (pria), calls annual monitoring "an important process". Amitabh Behar, ncas, calls for dissemination by the media. Participation is also sought from grassroots workers so that, as John Samuel, co-editor of the report, puts it, it becomes "not a report but a process of democratising the democracy".