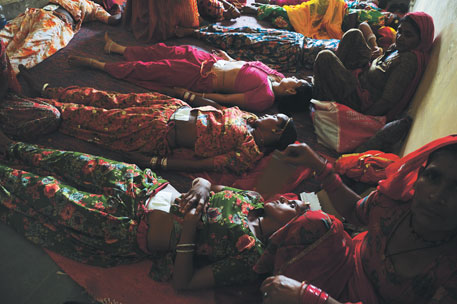 An unprecedented number of hysterectomies (surgical removal of uterus) were conducted in Bihar and Rajasthan in 2012. It later came to light that these surgeries, done mostly on women below poverty line, were a ploy by unscrupulous doctors to avail insurance benefits under Rashtriya Swasthya Bima Yojna. Apart from such cases a fairly large number of unwarranted hysterectomies are performed in the country and across the globe. While the surgery may be necessary in certain cases, like cervical or uterine cancers and uterus prolapse, most doctors treat it as the solution for all gynaecological problems.

This is alarming as hysterectomy results in a surgically induced sudden menopause. It is associated with life-altering complications like osteoporosis, weight gain, loss of stamina and digestive disorders, among others. A study has now linked surgical menopause to memory decline. Scientists from the American Academy of Neurology (AAN) have found that women who undergo surgical menopause at an early age may be at an increased risk of decline in memory and thinking skills.

For the study, to be presented at the annual meeting of AAN on March 16, 2013, the researchers monitored 1,837 women between the ages of 53 and 100 at the Rush University Medical Center in Chicago. Among these, 33 per cent had undergone surgical menopause at some point in their lives. The scientists recorded the age at which the women started menstruating, the age at which they reached menopause and the use and length of hormone replacement therapies, if any. The women were then tested for thinking skills and memory. It was found that lower the age at which surgical menopause was done, faster was the decline in overall thinking abilities and long-term memory related to concepts, ideas, time and places. Similar results were obtained even after factors such as age, education and smoking were taken into consideration. 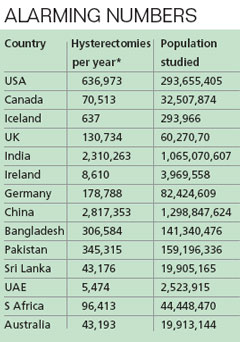 S M Bhattacharya, a physician at the department of obstetrics and gynecology at S C Das Memorial Medical and Research Center in Kolkata, says he has come across many patients who complain of memory loss after hysterectomy. “Menopausal symptoms are more acute in surgical menopause compared to natural menopause because in the latter situation menopausal changes take place slowly and the woman’s body gets time to adjust,” says Bhattacharya.

Several other studies in recent years have also highlighted the adverse effects of hysterectomy. A study by researchers from Sweden’s Karolinska Institute has found that hysterectomy before menopause increased the risk of cardiovascular diseases like heart attack and stroke. Another study, published in Obstetrics and Gynecology in May 2009, analysed the health effects of hysterectomy as well as the surgical removal of ovaries called oophorectomy. “We found that women who had their ovaries removed had a higher risk of stroke and lung cancer. Those who had their ovaries removed before age 50 had a higher risk of heart disease, stroke and death from any cause,” says study co-author William Parker. He says most hysterectomy cases are accompanied by oophorectomy.

“Rochester Epidemiology Project data studies have linked hysterectomy to long-term health consequences, including pelvic floor dysfunction and fracture risk, dementia, depression, and Parkinson’s disease,” says Elizabeth Stewart, professor of obstetrics and gynecology at Mayo Clinic in the US. “It is puzzling why hysterectomy is still so commonly used for treating non-cancerous gynaecological disorders,” she says.

No dearth of alternatives

Stewart says abnormal bleeding and fibroids (non-cancerous tumours) in uterus account for five times as many hysterectomies as all gynaecological cancers combined. “Interestingly, these are two indications for which we have made the most progress in developing alternative treatments,” she says. 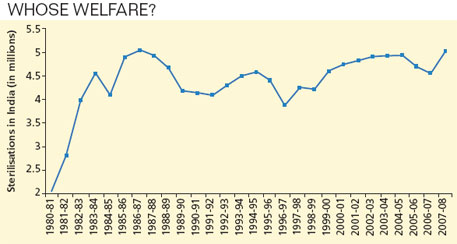 Some experts recommend Hormone Replacement Therapy (HRT) to minimise side-effects of hysterectomy. “While we found a link between surgical menopause and memory decline, women on longer HRT had slower declines,” says Riley Bove, lead author of the AAN study. HRT is generally recommended by doctors after hysterectomy and oophorectomy because it restores estrogen, the hormone the production of which is hampered due to the procedures. This could, therefore, have a protective effect against cognitive decline and should be researched further, say the researchers.

The therapy is also recommended for restoring estrogen in women who have natural menopause. Although, considered a wonder treatment, it has side-effects like breast tenderness, nausea, headaches, leg cramps, and weight gain and also other less common ones like depression, asthma, gallstones, vaginal bleeding and pain in chest and groin.

Women, sometimes, voluntarily ask for hysterectomy if menstrual problems severely interfere with their life and work, says Bhattacharya. But there are many, especially those below poverty line or living in rural areas, who become victims of unnecessary surgery. An August 2012 report by Human Rights Law Network (HRLN) and Narendra Gupta of Delhi-based non-profit Prayas found shocking links between female sterilisation programmes and hysterectomy. It shows that a large number of women who underwent hysterectomy had previously experienced severe abdominal pain after tubectomy or female sterilisation and hence sought the help of private practitioners, who declared hysterectomy as the solution.

“Every year, hundreds of thousands of women are sterilised at government-sponsored family planning camps under deplorable conditions,” says Karla Torres, women’s health rights activist at HRLN. “Female sterilisation goes hand in hand with the mass hysterectomies we have seen in Bihar, Chhattisgarh, and Rajasthan,” she says.

Unnecessary hysterectomies happen not only in India, but, surprisingly, also in developed countries like the US, the UK and China. “After cesarean section, hysterectomy is the second most frequently performed major surgical procedure for women of reproductive age in the US. Nearly 600,000 hysterectomies are performed annually in the US and an estimated 20 million US women have had a hysterectomy,” reads a statement by the Centers for Disease Control in the US.