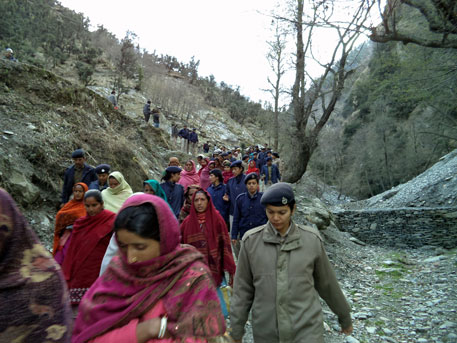 Himachal Pradesh police has charged 31 women of Gaddi tribe from the remote Holi area of of Chamba district, who were protesting against a hydropower project near their homes, with causing hurt to government officials and “inciting communal riots”.

The Chamba  police claims that the women were disrupting  the construction of road to the power house for the 180 MW Bajoli Holi hydroelectric project, being developed by Bengaluru-based GMR Private Limited, when they were arrested end of last month. For the past four years, residents of these villages have been protesting against shifting of the 15 km-long tunnel and the power house of the project from the right bank of the Ravi river to the left bank, saying it would disrupt the lives and forest  rights of residents of four gram panchayats. Since then, work on the project has made little headway at the dam and the power house sites.

The incident occurred on the evening of March 25 when there was a confrontation between the police and about 50 women who were keeping a constant vigil on the construction site, two km from Holi, one of the five panchayats affected by the proposed project. The women belonging to the local mahila mandals had erected a temporary camp to keep the vigil near the construction site. On March 25 afternoon, the women asked the contractors to stop the road construction work and sat on a dharna. The contractors called the police, following which the protestors were asked to leave the site. “The Chamba deputy superintendent of police reached the spot at about 5:30 pm  with 50 police personnel. He asked all of us to vacate the site and sit somewhere else because there was no place for people to stand as the site was full of rubble,” says 35-year old Pinky Devi of Holi village, one of the women leaders. The police official assured the women that he would stop the earth mover machine if they vacated the place. The women agreed.

As soon as the women left the spot, work resumed. “When we heard the machines after 15 minutes, we tried going back to the site but the police personnel stopped us. There was a scuffle, in which one of the policewomen fell down and was hurt, for which we have been blamed,” says Pinky. Police personnel rounded off 31 women – many of them have young children– and took them to Chamba, about 70 km from the spot. The Chamba police charged them for causing hurt to a government official and also for inciting communal riots under the IPC section 153 A.

According to a press statement issued by the sarpanch (village head) of Nayagraon panchayat, Mangni Ram, and other residents, the women were kept in custody for 24 hours.

“We arrested them because they attacked one of the police personnel and also for creating enmity between the residents,” says a senior police official from Chamba district. The police official, however, could not substantiate how these protests were causing enmity among residents.

“After the incident, sub divisional magistrate, Jitender Kanwar, visited the site along with a company official. He asked us to stop the protests and let the construction work happen peacefully. But we told him that he should grant us 15 days to start our own case against the project proponent,” says Pinky. The work in the construction site continued till March 29 as heavy rains stalled the protests for a few days. Thereafter, the women from the four villages were back at the site for round the clock vigil, continuing the protests and stalling the road construction.

A run-of the river project, 180 MW Bajoli Holi on river Ravi was awarded to GMR in 2007 by the Himachal Pradesh government. In 2008, GMR shifted the site of the tunnel and the powerhouse from the barren and uninhabited right bank of the river to the left bank, which comprises four gram panchayats, dense forests and rich agricultural land. The Union Ministry of Environment and Forests (MoEF) granted environment clearance and forest clearance in 2010 and 2012 respectively. Locals allege that the shift of the project components was approved by MoEF without application of mind whereas, the forest clearance has been granted in clear violation of the Forest Rigths Act. MoEF had granted forest clearance on the basis of a certificate issued by the Chamba district collector, stating that the locals had no right over the 75 ha of forestland to be diverted for the project. The women say that the local gram sabhas are the only bodies authorised to issue such certificates under Forest Rigths Act. Holi and Nayagraon gram sabhas have passed  resolutions against the construction of the hydropower project on the left bank. 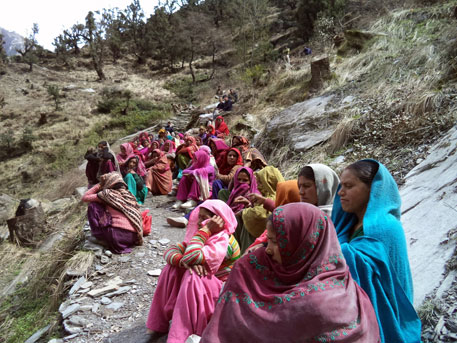 A report prepared by Himachal Pradesh State Electricity Board Limited in February 2011 cited several technical, economic and environmental reasons for not shifting the project to the left bank and that it could seriously hamper the people and ecology of the area.

“We are fighting because we have seen huge leaks in the tunnel of Chamera III project downstream leading to an entire village getting evacuated overnight. We do not want the same fate to befall us. Our struggle in exercise of the powers and responsibility to protect our natural resources under Section 5 of the Forest Rights Act shall continue till the company stops construction of the project on the left bank,” says Pink.

GMR says the project would be completed by 2018.

Report: The role of hydroelectric power projects in the climate change: a case study of Ravi basin in Himachal Pradesh