Wonders of the Sun

Installation of solar panels have made life comfortable 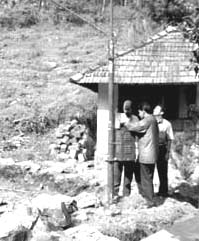 the solar lighting system in Mundanmudy village, the largest installation of its kind in the world, has changed the life-style of local people here. The hundreds of houses (393 precisely) lined one after the other with bright solar panels in this village of Idukki district in Kerala, are quite impressive.

Mundanmudy village is located at an elevation of around 1,500-2,000 metres near a reserved forest, with no access to the electrical grid. The connection only reaches the foothills, and even here due to the transmission losses, the light in the last few houses only glimmer.

Till 1997, the entire village was dependent on kerosene lamps. But, with the introduction of solar lighting system, the lighting dreams of this village have come true. Rajagiri College of Social Science ( rcss ) adopted this village in collaboration with the Community Aided Sponsorship Programme ( casp ), an ngo based in Mumbai.

The Adoration Sisters (nuns), based in the village conducted a door-to-door survey, which revealed that electricity and drinking water were the major problems of the villagers. This survey report was submitted to Japan's Ministry of External Affairs who subsequently released a grant of Rs 33 lakh under its grant-in-aid for Grassroots programmes, under which the college had earlier received grants.

Under the project, the households (around 590) were divided into 15 units, each unit consisting of 30 to 40 families. These households nominate their leaders who form the central committee where the convenor is usually a male and the joint convenor, a female. "This is because we encourage women's participation in our projects," says Benny George, manager, Aditya solar shop in Cochin. George was the coordinator of the rcss team when the project was undertaken.

Calculations revealed that Rs 33 lakh was not sufficient to execute the project on both electrification and drinking water supply. Though a set of solar panels cost Rs 11,200 only, Rs 8,500 was left for each household, so families interested in installing solar panels contributed and additional Rs 2,700 each. Eventually 393 households, around two-third of the entire village, agreed to take the chance.

The solar sets are made by tata bp Solar, a joint venture of bp solar and tata .

Solar Tech, a Cochin-based company carried out the tough task of installation in this village with no decent infrastructure. Aji Augustin an engineer from the company faced the challenge of installing them in houses scattered across the village and interspersed between boulders and thick vegetation. "There were no proper roads that connect one house to the other, so installing the solar panels was difficult," says Augustin. Three local people were trained to assist him in installing the panels. The project eventually got completed in a short span of five months.

"The project was executed smoothly, because the government was not involved," says one of the staff of Solar Tech lightly.

The concept of solar lighting was not new to many of the people. This was due to the strategy employed by Solar Tech who installed a panel at the Adoration Sisters' convent in the locality. "Curious villagers used to come and see the light and ask a lot of questions," says Augustian.
One of the first customers who came looking for a solar panel was Amina Sidiq, a 60-year-old lady, who is looked upon as a mother figure ( Amma ) by the local people. She knew that it would help her in operating her small teashop.

Since Rs 2,700 was a huge sum for down payment, she borrowed the amount from a local money lender at a monthly interest rate of five per cent. She managed to return the money the same year. She says that it was worth the cost and she even wants to buy more. "Now I open the shop even after sunset," she says proudly. She also mentioned that her grandchildren who are as old as the lamps are so used to the solar lights that they would find it difficult in their absence.

One has to see to believe the changes brought about by the solar lights in the life of the local people. Anthony Verkey, convener of the project committee says: "Using a kerosene lamp, it is very difficult for the children to concentrate for a long time," and adds, "but now they can study for longer hours." Educational improvement is one of the most impressive changes brought about by solar electrification.

For Jobi Joseph, a student and a budding artist, there is sufficient time for both his hobby and his studies: "Now I can differentiate various shades of colours at night, while I study for my final pre-university exams during the day."

"Around 150 households have television sets now, and they are more aware of what is happening outside," says George. Thomas Kurien, one of the local people who bought a 14-inch black and white tv four years back mentions that he is able to watch cricket, his favourite sport, with the help of the solar lights. The subsidised set now costs Rs 8,000 (which is otherwise Rs 14,000), but it is still unaffordable for these people whose annual income ranges from Rs 10,000 to 15,000. Most of them are dependent on rubber, which does not fetch them much income.


"The balance from the grant -- around Rs 2 lakh was used to built five ponds and five water tanks," says George. In addition, Rs 5,000 was collected from each of the 15 units to add to the project. Without any wages the local people volunteered to dig the ponds from where water flowed into the tanks built at a lower level. "In this manner water naturally collects in the ponds and flows downward without the need for electric pumps," says George. Sufficient water gets collected in the tanks to last the whole year, so the people need not extract groundwater. Before the amount is released, an engineer inspects the scene and submits a separate report for each stage, which involved digging of the ponds, protection and construction of water tanks. "The amount to be released depended on the engineer and how we interacted with him," says George. The report had to pass through at least five officials before it was finally cleared. Eventually, Rs 1,20,000 was sanctioned to the community.