Wood does a lot of good

It was the bane of the rubber tree, as the fungus Phytophthora literally ate into its every part. With the discovery of antifungal wood extracts, however, the fungus can be stopped dead in its tracks. The extract also meets today's criterion of ecofriendly fertilisers, being purely natural in its origin 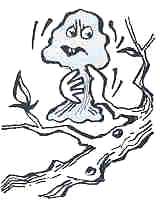 A FUNGUS that virtually eats into every conceivable part of the, rubber tree - Hevea brasiliensis - has finally met its match in an environment-friendly deterrent. Researchers from the Rubber Research Institute, (RRI) in Kottayam, Kerala, have developed a new ecofriendly fungicide from wood extracts of five locally available tree. Currently, highly toxic chemical fungicides are sprayed to contain the deadly effects of the fungus.

The fungus, Phytophthora, is quite a killer. In rubber trees, it causes, among others: leaf fall, a serious disease causing crop loss in susceptible clones; 'bark rot' or 'black stripe' that affects the bark of the tree being tapped during rainy seasons; 'patch canker', which affects the stem; 'shoot rot', which causes havoc in nurseries and immature plantations, and 'pod rot' that can reduce the number of healthy seeds, in seed collection centres.

Dubbing their finding as "the first of its kind", L Thankamma and M Jayadevi of the RRI report that water extracts from the heartwood of species such as rosewood, anjily, teak, jackfruit and enterolobium or the rain tree, have remarkable anti-fungal properties against Phytophthora. It,was observed that the heartwood of these trees were able to withstand bio-deterioration or decomposition induced by living organisms.

This naturally led researchers to test heartwood extracts to create safe fungicides. Detailed laboratory studies showed that polyphenols - chemicals that impart a dark colouring to heartwood bear fungicidal properties which could keep Phytophthora in check. "Though this is an in, vitro study, it has got high potential. If successful in the in vivo studies also, it will be a boon.in the field of disease management," reflect the duo hopefully.