World falls short of its goal to reduce child mortality

India accounts for the highest under-five deaths in the world, says the latest UN data 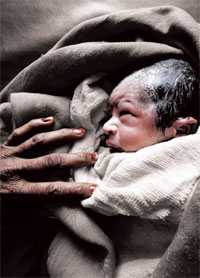 Despite a significant progress, the world is still short of meeting the UN Millennium Development Goal (MDG) to reduce child mortality by 2015, says new data released on September 16 by the UN.

The data show that under-five mortality rates have dropped by 49 per cent in the past three decades—from 90 deaths per 1,000 live births in 1990 to 46 in 2013. The annual rate of reduction has accelerated in the last two decades. But this is far below the two-thirds reduction required to the reach the MDG target by 2015. In 2013, globally, 6.3 million children under five died. Compared with 2012, the 2013 numbers show a reduction of 200,000 deaths. The reduction is only marginal as there are still 17,000 child deaths every day in the world. 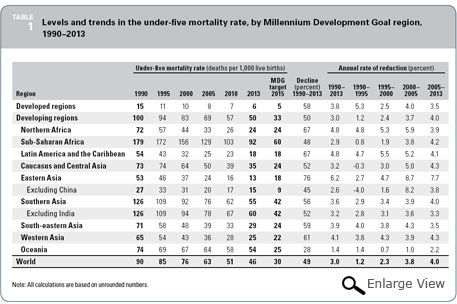 Of the regions that are set to miss the target, South Asia fares the worst. The region continues to have a high under-five mortality rate (55 deaths per 1,000 live births in 2013). Nearly one in three under-five deaths still takes place in this region. 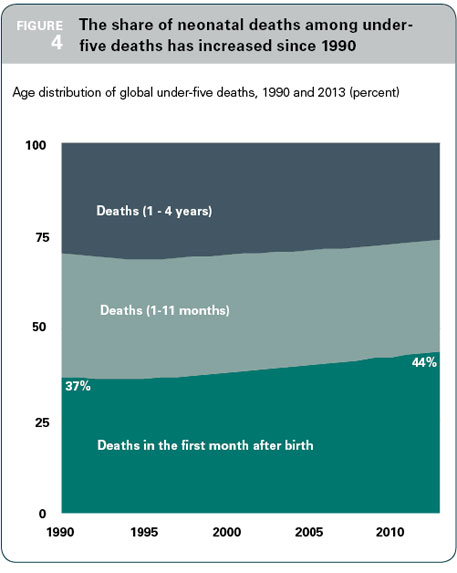 In 2013, 2.8 million babies died within the first month of life. This represents about 44 per cent of all under-five deaths. About two-thirds of these deaths occurred in just 10 countries.

Unfortunately, most of the children succumb to diseases that can be easily prevented. In 2013, 6.3 million children under five died from mostly preventable causes, around 200, 000 fewer than in 2012, but still equal to nearly 17 000 child deaths each day, according to the new estimates in Levels and Trends in Child Mortality 2014.

The major causes of neonatal mortality are pre-term birth complications and problems during delivery or birth.

“For continued progress, it is essential to invest more in health systems that deliver high-quality, affordable services to all women and children who need them,” said Olusoji Adeyi, Director of Health, Nutrition and Population at the World Bank Group.

The report notes that major improvements in child survival are in part due to affordable, evidence-based interventions against the leading infectious diseases, such as immunisation, insecticide-treated mosquito nets, rehydration treatment for diarrhoea, nutritional supplements and therapeutic foods. To check neonatal mortality, health interventions should aim at protecting maternal health.

In June this year, WHO, UNICEF and partners issued the first-ever global plan to end preventable newborn deaths and stillbirths by 2035. The Every Newborn Action Plan requires all countries to take the necessary steps to provide basic, cost-effective health services — in particular around the time of childbirth, as well as for small and sick babies — and to improve the quality of care.

“The global community is poised to end preventable maternal, newborn and child deaths within a generation,” said Flavia Bustreo, assistant director general at WHO. “We know what to do and we know how to do it. The challenge now is to move from plan to action—we are pleased to see countries like India beginning to lead the way.”

Levels and trends in child mortality 2014

Global, regional, and national levels of neonatal, infant, and under-5 mortality during 1990—2013: a systematic analysis for the Global Burden of Disease Study 2013

Levels and trends in child mortality 2013

Infant and child mortality in India: levels, trends and determinants