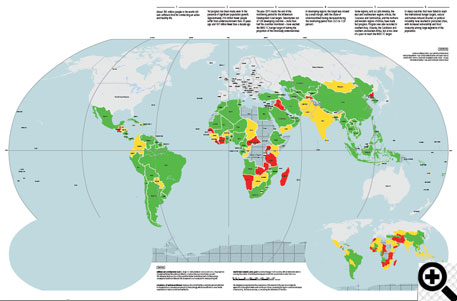 The world has missed its target of reducing hunger by half since 1990, according to the biennial report released by Food and Agriculture Organization (FAO). While the number of hungry people fell by 216 million, South Asia saw the lowest decline in the number of people facing hunger in real terms.

According to the report, Indian and Pakistan registered an increasing trend in hunger whereas Nepal, Bangladesh and Sri Lanka registered only a minuscule decline.

There were 1.1 billion undernourished people in the world between 1990 and 1992 when the UN Millennium Development Goals were set. It has now come down to below 795 million.

In South Asia, the number of undernourished people declined from 291.2 million to 281.4 million. The rate of decline is one of the lowest in the world.

Undernourishment is when a person is not able to acquire enough food to meet the daily minimum dietary energy requirements, over a period of one year. FAO defines hunger as being synonymous with chronic undernourishment.

Seventy-two of 129 countries monitored by FAO have achieved the MDG target of halving the prevalence of undernourishment by 2015. In addition, 29 countries have met the more ambitious goal laid out at the World Food Summit in 1996, when governments committed to halving the absolute number of undernourished people by 2015.

Some regions, such as Latin America, the eastern and southeastern regions of Asia, the Caucasus and central Asia, and the northern and western regions of Africa have reached the target, as they made fast progress in reducing undernourishment.

The progress was slow in regions like South Asia, Oceania, the Caribbean and southern and eastern Africa.

Lessons from the MDG experience

While the report outlines that there is no one-size-fits-all solution to contain hunger, it suggests some important measures such as cash transfers, increasing agriculture productivity and fast economic growth.

It recommends improving agricultural productivity of small and marginal farmers and encouraging family farming. “High performers on that front in Africa met the MDG hunger target while those that made slower progress did not,” the report states.

With the respect to economic growth, the report says, “While economic growth is always beneficial, not least because it expands the fiscal revenue base necessary to fund social transfers and other assistance programmes, it needs to be inclusive to help reduce hunger.”

The report recommends cash transfers for vulnerable households. At the same time, it also talk about health insurance and school meal programmes which are linked to guaranteed procurement contracts with local farmers.

“Some 150 million people worldwide are prevented from falling into extreme poverty thanks to social protection, according to SOFI (State of Food Insecurity report)—but more than two-thirds of the world's poor still do not have access to regular and predictable forms of social support. Transfers help households manage risk and mitigate shocks that would otherwise leave them trapped in poverty and hunger,” the report states.

The State of Food Insecurity in the World 2014

Gender and food security: towards gender-just food and nutrition security