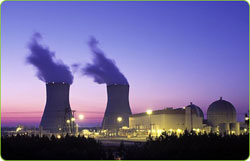 It looks like the global campaigns to promote renewable energy are helping. A recent analysis has found that solar and wind energy’s share in global power production is steadily at the expense of nuclear power.

The analysis by Vital Signs Online, a website by independent research body Worldwide Institute, says that nuclear’s surging growth of the 70s and 80s has actively fallen as solar and wind have taken up the “alternative” mantle. It however warns the two renewable energy sources have a long way to go until they catch up with fossil fuel power plants.

In terms of actual capacity, the peak for nuclear power was 2010, when the sector boasted 375.3 gigawatts (GW). By last year, that total had declined to 371.8 GW, according to the International Atomic Energy Agency. For solar energy, the total installed capacity globally stands at slightly more than 140 GW, but the industry’s growth trajectory is steep and rising daily.

The analysis found that just 31 countries globally operate nuclear reactors on their territories, compared to 85 countries that have commercial wind turbines installed, and more than 100 nations that have solar PV arrays installed at capacity. The report concludes by calling the chances of a nuclear revival “slim”, adding that “practical, affordable” renewable energy’s will likely to grow at the expense of nuclear power.