Controlling diet can help children get rid of intestinal worms 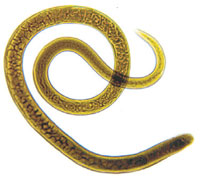 MOST children suffer from worm infections in their intestines sometime or the other. Such infections cause low appetite and weight loss, making their parents overfeed them. If studies on mice are any indicator, it would be better to starve the kids a little to get rid of the worms than overfeed them.

One problem linked to worm infection is that the mechanisms behind weight loss are not understood. How feeding affects the whole process is also not clear. A study tries to answer this. The researchers infected mice with Trichinella spiralis, a worm that first inhabits the small intestine but later moves to skeletal muscles and causes inflammation in both the places.

The researchers found that in response to both intestinal and muscular phases of infection, the mice’s immune system was making the body release a leptin, a hormone that causes a feeling of satiety. This made the mice eat less and led to a reduction in weight and fat deposits. Due to weight loss, the worms were expelled from the mice’s body.

The researchers then tried to find if reduction in fat was beneficial. They restored the leptin levels of the mice during worm infection and found that the mice could not make the correct immune response to the parasite in this case. This resulted in a delayed worm expulsion suggesting that the reduction in fat deposits actually helps the mice expel the parasite from the intestine.

“Our study provides novel insights into how the immune system interacts with feeding pathways during intestinal inflammation,” say the researchers in the study published on January 17 in PLOS Pathogens.