Oceans are rising much faster near the coasts 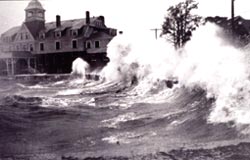 satellite images of sea levels have provided evidence of a bizarre effect -- the oceans rising faster near the coast than in their middle segments. Simon Holgate and Philip Woodworth of the uk-based Proudman Oceanographic Laboratory used the images of the Topex satellite to nail down the discrepancy. As per their analysis, on an average, global sea level rose by 2.8 millimetres per year between 1993 and 2002. But the water level within 100 kilometres of the coast rose faster -- 3.7 millimetres per year.

In 1996, atmospheric scientists had predicted this effect. Kirk Bryan and his colleagues from us-based Princeton University had propounded that as ocean heats up, the water expands, creating waves that hit the coast and then travel around the rim of the ocean basin for several years. In other words, oceans behave like water in a bathtub. If one splashes in the tub, waves travel outwards and then run around its edges. Bryan and his colleagues knew this well but they had no evidence to validate the hypothesis.

The confirmation of the theory may be bad news for the many millions of people who live near the shoreline. In the near future the difference between the coast and ocean could get worse, and flooding could be an even bigger problem than what has been anticipated (Geophysical Research Letters, Vol 31, No 7, April 9, 2004).