Salt-rich sea air sparks off rain that rinses out pollution 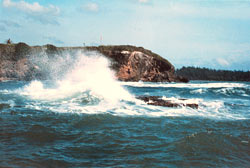 the refreshing breath of sea air may do more than raise the spirits. The salty sea spray encourages rain that washes out dust and other pollutants, thereby cleaning the atmosphere. These are the findings of a new study conducted by researchers from Jerusalem-based Hebrew University. "We have discovered a process by which nature cleans pollution quite effectively when it spills from land over to oceans," said Daniel Rosenfeld, one of the researchers.

According to Rosenfeld, tiny specks of air pollution can suppress rain by serving as nuclei on which moisture can condense. They form such tiny droplets that they can remain suspended in the air without falling. But the salty sea spray attracts water into larger droplets, which can merge with the tiny ones, growing big enough to form rain and wash the pollutants out of the air. "This is the reason why the air in Hawaii is always so pristine, except during volcanic eruptions. It's the salt that does the trick," says Rosenfeld.

However, Graham Feingold of Boulder-based National Oceanic and Atmospheric Administration is cautious about the study. "We must bear in mind that only about one in every 100,000 particles is a giant particle capable of forming a small raindrop," Feingold said. If salty spray does help create rainfall over the ocean, could it also be used to increase rain in the desert, Rosenfeld was asked. "There is no reason why we can't do artificially over land what happens naturally over oceans. In fact, we have started in Israel an experiment of 'cloud seeding' using brine from the Dead Sea," he said.