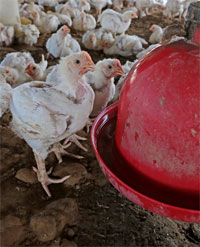 Indian consumers are at a greater risk of exposure to antibiotic resistance from the consumption of poultry meat reared with antibiotics. This is due to Tuesday’s ruling of the World Trade Organization (WTO) on the dispute between India and the US on the former’s avian influenza-related restrictions on importing US agricultural products.

The WTO termed India’s avian influenza (AI) restrictions as “inconsistent”, saying that they are not based on relevant international standards or on scientific risk assessment. In addition, the WTO also said these protection measures “constitute a disguised restriction on international trade”.

In 2007, India had restricted the import of US products, including poultry meat, eggs and live pigs, in order to prevent the entry of AI from the US. The US, in 2012, requested for consultations with India under the dispute settlement provisions of WTO.

United States Trade Representative Michael Froman calls the WTO ruling a “major victory for American farmers”, in an official press statement. He also says that “our farmers produce the finest – and safest – agricultural products in the world”. This is in contrast to the revelations made by a Reuters investigative report, released last month, on how poultry firms in the US routinely feed antibiotics to chickens.

The report revealed the systematic administration of antibiotics in feed by major US poultry firms. Some farms also administered antibiotics termed “critically important” in human medicine by the US Food and Drug Administration (FDA).

Eighty per cent of all antibiotics sold in the US are used for the production of food-producing animals and not for humans, according to the Centers for Disease Control and Prevention. The absence of mandatory measures by the US government increases the rampant use of antibiotics for the production of food-producing animals. Countries like Denmark and the Netherlands have mandatory restrictions in place, banning the non-therapeutic use of antibiotics.

The US FDA has put in place only voluntary guidelines, since 2013, for limiting the non-therapeutic use of antibiotics.This includes growth promotion and disease prevention in food-producing animals. An executive order issued by US President Barack Obama, in September, on combating antibiotic-resistant bacteria, also supported FDA’s voluntary measures.

Consumer advocacy organisations and scientists in the US have criticised the FDA for its weak stand on curbing the rampant use of antibiotics in the production of food-producing animals, especially when the incidence of antibiotic resistance in humans is increasing.

The Centre for Science and Environment (CSE) had released a study in July 2014, which revealed the presence of antibiotic residues in chicken meat obtained from Delhi-NCR. CSE also highlighted the rampant use of antibiotics in the production of poultry and the ineffectiveness of the Indian government’s measures in curtailing it.The import of poultry meat from the US will increase the exposure of the average Indian poultry consumer to antibiotic-laden meat and, thus, increase the risk of antibiotic resistance.