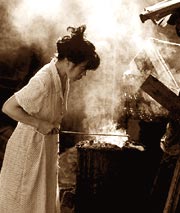 residents of China's Xuan Wei county, exposed to coal emissions indoor, carry genetic mutations that greatly increase their risk of developing lung cancer. These are the findings of a study by researchers from the us-based University of Pittsburgh and University of Michigan. The lung cancer mortality rate among some communities in Xuan Wei is 20 times more than the country's national average.

The indoor coal emissions can be mainly attributed to cooking and heating of homes. In many homes of Xuan Wei, exposure levels to polycyclic aromatic hydrocarbons (generated during cooking with smoky coal) are similar to those experienced by coke oven workers (who are said to be most vulnerable to lung cancer because of coal combustion).

During the study, the researchers analysed sputum samples from the bronchial tract of 92 individuals who did not show symptoms of lung cancer; these subjects were screened for p53 and k-ras mutations. Damage to both p53, a tumour suppressor gene that prevents normal cells from turning into tumour cells, and k-ras, a gene that transforms a cell into a cancerous one, is fundamental to the development of a vast majority of cancers. Mutations to both p53 and k-ras are primarily caused by chemicals called polycyclic aromatic hydrocarbons.

According to Phouthone Keohavong, one of the study authors, the findings reinforce their previous study results -- it was found that the frequencies and types of k-ras and p53 mutations in women from Xuan Wei who were non-smokers were similar to the mutations found in men from Xuan Wei who smoked. "Tobacco smoking is rare in women from Xuan Wei, yet they have a high lung cancer death rate," says Keohavong, adding: "This is because they start the fire for cooking and spend more time inside homes that lack ventilation. Therefore, they are more likely to be exposed to potentially dangerous emissions." He feels raising awareness about the adverse effects of indoor air pollution among Xuan Wei's people can help save many lives.