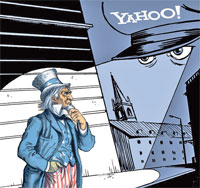 Yahoo has begun legal action demanding it be allowed to disclose details of US national security agencies’ requests to access the personal data of its users. US law prohibits organisations from providing these figures. Yahoo said withholding such information from the public “breeds mistrust and suspicion” about the US government.

The web company followed Google and Microsoft in releasing its first transparency report in the second week of September, detailing requests for users’ data by 17 countries in which it has a legal entity.

Yahoo had previously taken legal action to require the US government to publish documents, which it said would show the company had objected to the establishment of Prism, a surveillance programme uncovered by whistleblower Edward Snowden.