the March 31, 2003, deadline set by the Supreme Court (sc) for cleaning the 22-kilometre Delhi stretch of Yamuna river has come and gone. Yet the river, which is the source of 70 per cent of Delhi's drinking water, remains a "dirty drain" 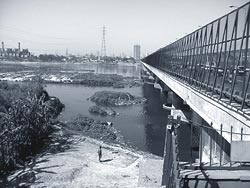 the March 31, 2003, deadline set by the Supreme Court (sc) for cleaning the 22-kilometre Delhi stretch of Yamuna river has come and gone. Yet the river, which is the source of 70 per cent of Delhi's drinking water, remains a "dirty drain".

On April 10, 2001, the sc had asked the state to ensure that Yamuna should be clean by March 2003. This order was passed following reports by the Central Pollution Control Board (cpcb) about the deteriorating quality of the river's water. Yet in November 2002, the total coliform content of the river water at Madanpur Khadar was 11.8 crore per 100 millilitres (ml). The apex court had ordered the coliform content of the river water to brought up to 5,000 per 100 ml. Coliform bacterium are found in sewage.

The 22-km Delhi stretch contributes to around 80 per cent of pollution to the river, most of which is sewage. R C Trivedi, additional director, cpcb, points out: "Delhi generates 3,300 million litres per day (mld) of sewage, of which only 1,500 mld is treated. The rest flows into the Yamuna." In fact after Delhi, 490 kilometres of the river are considered dead.

Till now, the Delhi government has barely bothered to implement the court order. Of the proposed 15 common effluent treatment plants, which are supposed to treat effluents from industrial estates, only three have been commissioned. Of the the 959 common toilet complexes built by mcd, most are not functioning. "Unless all the agencies involved in the clean-up work together, no success can be achieved," says S K Mahajan, officer on special duty, Yamuna Action Plan, mcd.

Some time back the Delhi government had sought an extension of the Yamuna clean-up deadline to 2005. When asked if the authorities would be able to adhere to even this time-frame, the moef official was pessimistic: "Yamuna cannot be cleaned by 2005. It would take a minimum of 10 years." Clearly, there's no hope on the horizon for Delhiites.