Year of the girl child

El Nino's little sister La Nina is all set to bring rain in abundance to Australia, Indonesia and some other parts of Asia 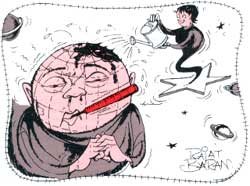 IF WASYL UROSDOWSKY is right then La Nina, the little sister of El Nino, is all set to hit Indonesia. Drosdowsky, a Melbourne-based weather scientist with the Bureau of Meteorology Research Centre in the Australian state of Victoria, is of the opinion that though La Nina is expected to bring heavier rainfall it isn't as destructive as El Nino. Peering at the satellite pictures of the weather before him he feels that La Nina is likely to develop by the year end.

La Nina is a counter ocean current which emerges after the El Nino effect has exhausted itself by running its course in the eastern pacific. Scientists are of the opinion that it reverses the extreme dry conditions created by El Nino.

Sri Diharto of Indonesia's meteorological and geophysical agency says that the possibility of La Nina hitting Indonesia is around 60 per cent. In mid-May he had said this possibility was about 35 per cent.

Though La Nina is expected to bring heavier than normal rain to compensate for the lack of it during the El Nino effect, it is not expected to be as violent as its brother say scientists. With La Nina sea temperatures are expected to rise in the western Pacific producing heavy rainfall in Indonesia and surrounding countries and parts of Australia.

Most parts of Indonesia are already experiencing above normal rainfall. A sign that La Nina may have already arrived in the country. El Nino was blamed for causing the worst drought in decades in the region. A drought which contributed to the forest fires in the region and badly affected the foodcrops, especially the rice crop, the staple diet of the people of the area. The extra rainfall which La Nina has brought to the region, around this time, is supposed to be good for the nation's agriculture.

La Nina's timing is very important. At particular risk is the rice crop in Indonesia. If La Nina occurs round year-end it will coincide with Indonesia's rice harvest which normally starts end December. Very heavy rainfall can destroy the crop, for paddy rice cannot survive if submerged for weeks. Will Indonesia's fragile, hazeravaged, economy be able to take this battering is another question. According to the us Department of Agriculture the country is expected to import five million tonnes of rice this year.

After having achieved self sufficiency in rice 14 years ago Indonesia has achieved the distinction of being the world's largest rice importer today. Rains at the wrong time will also make matters worse for the sugarcane crop. Additional rains could lead to a decrease in the sugar content of cane, they could also hamper transport of cane to the mills. As it is, Indonesia is Asia's largest white sugar importer.

But there is a school of thought which does not agree with Drosdowsky. According to the Meteorological Service of Singapore (MSS), La Nina has already arrived and sooner than expected. MSS scientists blame it for causing floods in China, India and Bangladesh. In China nearly half of the 11,000 square km country was inundated by floods. Over 10,000 homes have been destroyed. In all 20,000 medical teams and 130,000 staff arc working to prevent outbreaks of epidemics. Wet weather phenomenon will prevail through the rest of 1998 because of La Nina, causing heavy rains, said a MSS spokesperson.

In July and August, Singapore and many parts of Indonesia, including Borneo, Kalimatan and Sumatra, had above-normal rains. For Singapore, the MSS spokesperson said the above-normal rainfall would not last beyond October 1998. Central and southern China, Bangladesh, Burma and eastern and northern parts of India have seen a "typical but quite strong" southwest monsoon season this year. Torrential rains have led to unusually heavy floods and landslides in many parts of India.

Malaysia is already taking measures to prepare for an onslaught of wet weather. Authorities have begun a drive to unclog drains and remove garbage The drive includes trimming of trees and cleaning of the streets.

Having weathered the agricultural and ecological damage caused by El Nino last year, it seems Asia is now bracing for another battle with nature,this time with La Nina.