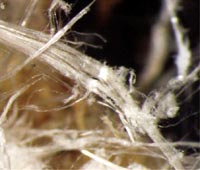 Trade interests always reign supreme, usually disastrously so: the Rotterdam Convention on hazardous chemicals might soon be rendered purposeless if the trend spearheaded by Russia and Canada at the convention's first Conference of Parties (cop-1), held on September 20-24 in Geneva, is any indication. The two countries, along with India and many others, blocked the inclusion of chrysotile (white) asbestos in the convention's prior informed consent (pic) list of toxic and hazardous chemicals. Chrysotile, a well-known carcinogen, accounts for 94 per cent of the total commercially produced asbestos.

The convention came into force on February 24, 2004, and has been signed and ratified by 74 countries. It enables member nations to add, through a unanimous decision, such chemicals to the pic list as have been banned or severely restricted in two regions of the world. Trade in a listed chemical can proceed only after exporting countries inform buyers about its toxicity, and the latter do not voice any objection within 18 months. At cop-1, member nations added 14 chemicals to the existing pic list of 27. The new additions include pesticides like monocrotophos and parathion and petrol additives tetraethyl lead and tetramethyl lead.

"This is only the second time that delegates have rejected recommendations made by the Interim Chemical Review Committee of the convention. The first time was in November 2003 when, once again, the chemical was chrysotile," points out Laurie Kazan-Allen, coordinator of the International Ban Asbestos Secretariat, London. Among the supporters of chrysotile at the meet were Canada, Russia, India, Iran, Ukraine, Ghana, China, Kazakhstan, Mexico, Indonesia and Zimbabwe. "We are not convinced that the opinion of putting chrysotile on the pic list is correct. We support the statement by the Canadian delegation," said India's representative at the meet, Ramesh Inder Singh, who is a joint secretary at the Union ministry of chemicals and fertilisers. Russia was the top producer of chrysotile in 2003, followed by Kazakhstan, China, Canada and Brazil. India's annual consumption of asbestos is about 125,000 metric tonnes, most of which is imported, primarily from Canada and Russia.