You and your machine

The relationship between humans and machines has changed a lot in the past few years, but the success of a recent study would completely revolutionise the interface 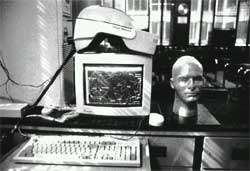 thanks to the recent developments in virtual reality and multimedia technology, the interface between human beings and machines has become more personal. Now, instead of concentrating on the physical aspects of such interface -- making keyboards more comfortable for instance, scientists have been trying to find ways to teach human sensitivities to machines. So do not be surprised if in the near future you come across a computer that can replicate a picture similar to your mental image of say a 'sunset near the sea'.

As every person perceives an experience in his own way, two people might conjure up different images of the same idea. So how can scientists get to handle all these diverse qualities and feed them to the machine in a format it can handle? To answer this question, a new discipline called 'kansei engineering' has been developed. Kansei interface is a human-machine interface that lets the user convey to the computer some aspect of tastes, feelings, senses, emotions, ideas and intentions.

The greatest progress so far has occurred in searching for graphical databases. In Japan's Keio University, a research group has developed a prototype system that can piece together scenic images based on sentences describing a view. In case a graphic designer wants an image of a 'majestic mountain rising from a grassy plain', the computer using the adjective 'majestic' searches the database for appropriate images. A picture of a grassy plain is retrieved and layered over the image of a gently sloping mountain. The picture is then placed in the backdrop of a clear blue sky.

The Japanese Electrochemical Laboratory has developed an Electronic Art Gallery, offering a collection of artistic paintings and photos. Special algorithms let the user search for desired images in the gallery via query, either by 'subjective description' or 'visual example.' If the gallery viewer feels like looking at paintings that create a 'refreshing impression', those words can be entered into the system which will then search for image files that fit the bill.

Such kansei interfaces might provide what is needed to wade through tomorrow's multimedia databases, which promise to dwarf even today's largest files. This technology could also provide a welcome boost to on-line shoppings on virtual malls. Eventually, it may be possible to interact with a computer as if it were another human being, say researchers. But this would require a sea change in the way machines are designed. The computer will have to understand human sensitivity, working almost intuitively to grasp the user's intentions, they add.

They, however, concede that this is far easier said than done. Since each individual is different, engineers have to find ways to measure and systemise human sensitivity. Though progress in this field has largely been a matter of trial and error, two strategies have emerged. One uses the mathematical approach to the problem, analysing and quantifying kansei using statistical methods. The other involves directly teaching the machine about the user's sensitivities.

Research into the alternate strategy of getting the user to introduce their own sensitivities to the computer has also borne fruit. A research group led by Shuji Hashimoto at Japan's Waseda University has developed a system that enables a person to express and compose music through body movements. Since a person cannot make the same hand and body movements twice, the prototype system is equipped with a neural network that handles small variations in input.

Any number of industries and services employing information technology could benefit from a kansei interface. Imagine a computer that can interpret the operator's facial impression, tone of voice, for instance. Researchers say surgery, medical diagnosis, computer-based training, city planning and architecture and information services could be revolutionised through kansei engineering.