Blasting tumours with particle beams. That's what European scientists are trying to do 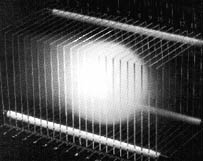 this is where physics meets medicine. The science of particle beams may be quite beyond the limits of medical science, but the two might soon collaborate, with results that may surprise many doctors (of medicine, that is). Two new research programmes in Europe have begun exploring down-to-earth uses for two different types of particle beams: treating patients with intractable brain cancer. Recently, the European Union's ( eu ) commissioner in charge of research, Edith Carson, inaugurated a five-nation programme of tumour therapy using neutron beams from the high-flux reactor at eu 's Joint Research Centre in Petten, the Netherlands. And soon, two patients will get a first indication of whether a carbon-ion beam therapy developed at Germany's heavy-ion research centre ( gsi ) in Darmstaldt has halted the growth of their tumours ( Science , Vol 279, No 5352).

Researchers at Petten are the first in Europe to use a technique called boron neutron capture therapy, which builds on current work in Japan and at Brookhaven National Laboratory ( bnl ) in New York. Patients are injected with a boron-containing compound that selectively accumulates in the tumour tissue. Researchers then expose the patients to neutrons from the reactor, which are absorbed by the boron nuclei. The nuclei then emit damaging short-range ionising particles that can kill the surrounding tumour cells while, in theory, leaving the healthy cells comparatively undamaged.

The Petten team has already treated five patients and hopes to treat 40 more over the coming months. "There's an urgent need for controlled clinical trials to test the benefit of this treatment," says team member Wolfgang Sauerwein. The team plans to spread the radiation over four sessions to lessen damage to normal cells --- bnl used just a single dose. "We're very interested to see how that goes," says a bnl spokesperson.

In Daemstadt, gsi , in collaboration with the University of Heidelberg, the German Cancer Research Centre in Heidelberg, and the Rossendorf Research Centre near Dresden, Germany, has recently begun using highly focused beams of high-energy carbon ions to attack tumour tissue. Such heavy-ion therapy was first attempted at the Lawrence Berkley National Laboratory in 1975, but it's 1940s-vintage accelerator did not have a sufficiently stable beam or tuneable energy, says gsi 's head of radiation biophysics, Gunter Kraft. Japanese researchers at the National Institute of Radiation Research have also treated more than 150 patients with carbon-ion beams. Although they have had some success, their beams cannot be focused entirely on the tumour, so some damage to normal tissue has occurred, says Kraft.

To overcome these problems, the German team has developed a new beam-steering system. It divides the target tumour into layers and, starting with the deepest, scans each tumour layer in the same way an electron beam scans a television screen. "By changing the beam's energy, it is possible to change depth very precisely," says Kraft. The ion bombardment produces gamma rays that researchers use to track the beam during treatment. " It's a very promising technique because of the selectivity of the target tissue," says radiobiologist Andre Wambersie at the Catholic University of Louvain, Belgium.

During the pilot phase, which began in December 1997, two patients with tumours at the base of the skull were treated, and these will soon be followed by another 10 patients. A second phase will treat a larger group. The treatment proved that the beam can be manipulated with "millimetre precision", says Kraft. But the key test will come when the first two patients will be checked to see how much the treatment has shrunk the tumomrs.