Zeroing in on persistent pollutants

Paints and refrigerants have chemicals like polychlorinated biphenyl (PCB) and polycyclic aromatic hydrocarbons which are difficult to remove from the environment. Scientists have engineered enzymes that can remove them. Dinsa Sachan talks to Michel Sylvestre, one of the researchers, about the safety and applications of the findings published in the October issue of Journal of Biological Chemistry. Sylvestre is professor at the Institute national de la recherche scientifique in Quebec, Canada 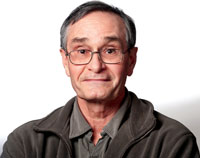 How did the idea of altering enzymes strike?

We knew for many years that bacterial enzymes can degrade several persistent pollutants like PCBs, but the degradation is not very efficient. So these enzymes need to be remodelled to enhance their activity. Currently, special incinerators that reach a temperature of 1200°C are required to remove PCBs. But the process is not feasible to incinerate large amounts of contaminated materials like soil and sediment. Bacterial treatment would be the most appropriate technology to degrade them.

Why are PCBs difficult to remove?

PCBs consist of a complex mixture of 209 structurally related chemicals (congeners) each of which contains one to nine chlorine atoms. Only the congeners that contain between one to three chlorine atoms can be partially degraded by the bacteria, others are persistent.

How does the new method work?

Enzymes are like a key. They consist of two parts, a whole (catalytic pocket) that fits exactly the shape of the chemical to be degraded and a catalytic site which is involved in the chemical reaction required to degrade the chemical. In our study, we focussed on enzymes involved in PCB degradation and found it is possible to enhance the activity of the enzyme by increasing flexibility of the catalytic pocket. This is achieved by inducing mutations in amino acids that modulate the flexibility of the pocket. This results in structures that get easily reshaped during the chemical’s binding. In this way the pocket can accommodate larger molecules.

What are the implications of the findings? How economical will it be?

The production and use of PCBs have been banned in most countries. But because of their persistence, these chemicals will remain a matter of concern. Our engineered enzymes can degrade most of the PCB mixtures, including Aroclor 1248 and 1254 that are difficult to degrade because of higher levels of chlorine. The cost for manufacturing the enzymes will be high because they are proteins and their shelf life is short. To use these enzymes in remediation processes, the easiest way will be to engineer naturally-occurring bacteria that produce larger amounts of PCB-degrading enzymes. For this the genes that produce the enzyme in naturally-occurring bacteria are replaced by engineered genes. Another approach would be to create transgenic plants producing these new enzymes.

Will these enzymes have any harmful environmental impact?

This is an important question. The enzymes we have developed are identical to those existing in nature, but they are engineered to do a better job. As such they should not be harmful. Currently, in the pharmaceutical industry and in ethanol production, engineered enzymes like oxygenase are used without a problem. The engineered enzymes will not be used directly in nature. They will be cloned in bacteria or plants. A process involving engineered enzyme will however require an assessment whether they are harmful.