Zimbabwe to cull elephants to check their growth 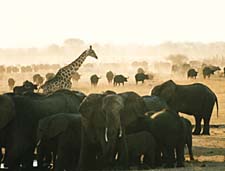 Zimbabwe has announced plans for culling and contraception to slow down rampant elephant population growth. The announcement comes close to a recent incident in which a rogue elephant trampled to death a British woman and her daughter in the Hwange national park in northwest Zimbabwe.

The country's elephant population is growing at a rate of more than 6 per cent per year, disrupting the biodiversity of national parks, said environment minister Marthinus van Schalkwyk. The plan, however, faces opposition from conservation groups which dispute official figures and argue that the government has not conducted a wildlife audit for seven years. The proposal remains open for comments until May 4, 2007.

In another incident, Zimbabwe's wildlife management authority is killing elephants near Lake Kariba to feed crocodiles at park-owned crocodile farms. About 100 elephants a year have been allocated to sustain the business.