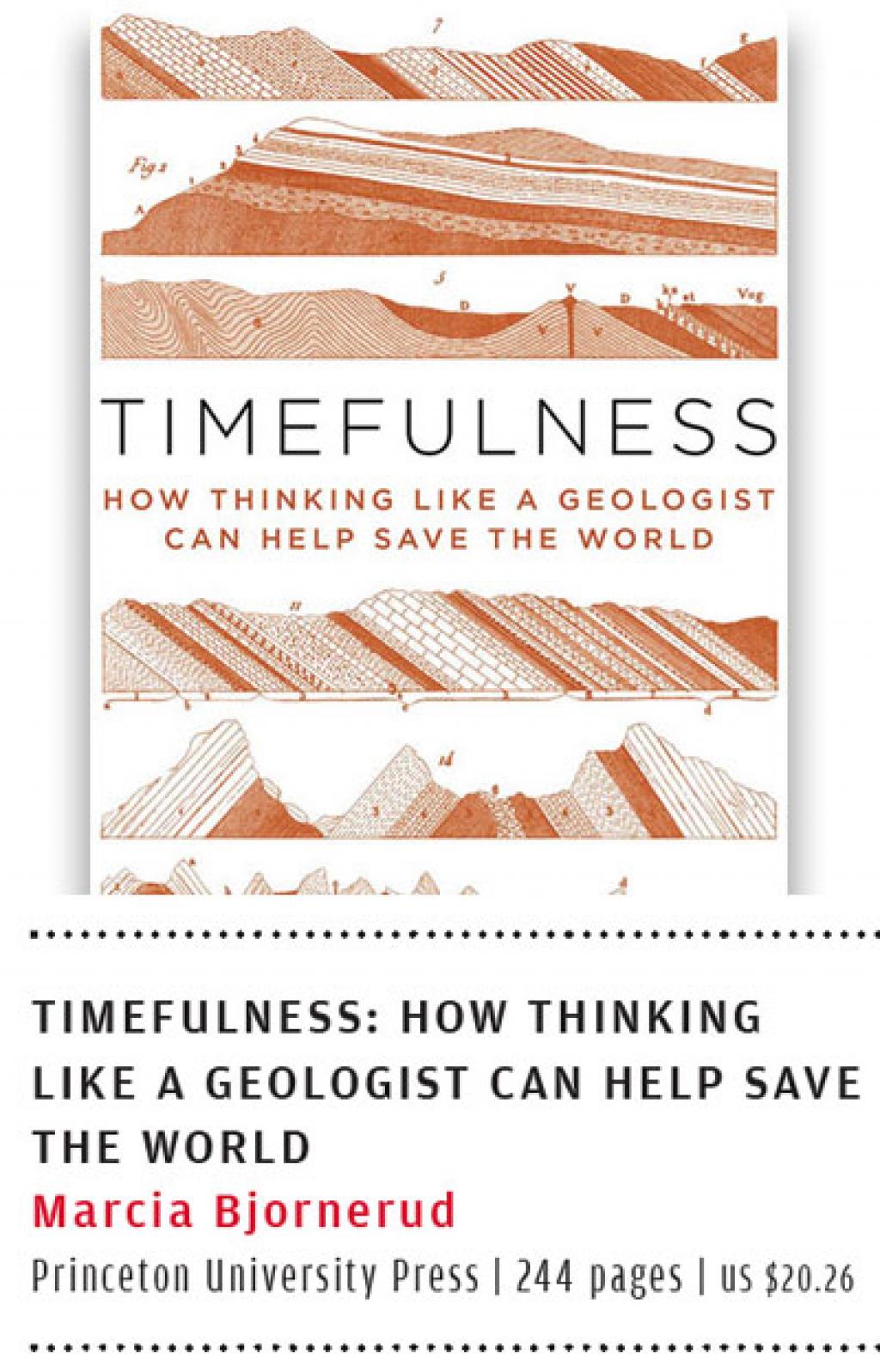 "Americans believe that death is optional,” Marcia Bjornerud quotes Woody Allen in her book, Timefulness, to explain how we perceive time due to chronophobia—inherent fear of time. A professor of geology and environmental study at the Lawrence University, Wisconsin, USA, Bjornerud takes the reader through the highs and lows of geological time.

She comes up with baffling nuggets, like how erosion actually leads to an increase in the height of a mountain. As she espouses a percept of time that’s geological in nature and pace, rocks become the clocks and calendars of Mother Earth—tracing geological changes like volcanic eruptions; accretion of coral reefs; and, the growth of mountain belts. As opposed to time-scales we are accustomed—minutes, hours and days—Bjornerud introduces a pace of time that is much slower, and at the same time, much grander than the day-to-day sense of time that we have. If Earth has its own time, measured in rocks, then, geologists like Bjornerud are the timekeepers of the planet.

Bjornerud rationalises global problems we are facing today like climate change and ecological devastation, and says that the reason for this evidently self-harming behaviour is because of the way we comprehend time.

Learning from the past

“As a species we have a childlike disinterest and partial disbelief in the time before our presence on Earth. With no appetite for stories lacking human protagonists, people simply cannot be bothered with natural history,” she says, and this leads to colonising eco-systems with complete disregard for its planetary history. “Like inexperienced but confident drivers, we accelerate into landscapes and ecosystems with no sense of their traffic patterns, and then react with surprise and indignation when we face the penalties for ignoring natural laws.”

As an example of this myopic way of looking at time, she cites the Young Earth creationism, which believes in a recent origin of Earth, as opposed to the 4-4.5 billion-year-old Earth that has been calibrated by geologists using zircon crystals (for a geologist, Bjornerud says, instead of diamonds, which turn into graphite under high pressure, Zircons are forever). “Compared with the deep, rich, grand geological story of Earth, the Genesis version is an offensive dumbing-down, an oversimplification so extreme as to be disrespectful to the Creation,” she remarks.

Bjornerud has made sure that her message reaches her audiences without being crippled by jargon. Written in a manner that won’t daunt a novice in geology, Bjornerud starts her tale from her field research site on the Arctic archipelago of Svalbard, a place that has no official time due to a border dispute between Norway and Russia. Just like the farthest reach of astronomy is the Deep Space, the geologist version of it is the Deep Time. This is a timescale in which mountains and rocks are formed over various geological periods through the history of the planet. She links this concept on the need to think in terms of Deep Time to be able to get out of the vicious cycle of short-term thinking that is driving the world to destruction.

She has her problems with the mainstream representation of geological history too. “In the context of Earth’s history, dinosaurs are like attention hogging celebrities who get a disproportionate share of media coverage when there are so many important stories to follow,” she says. She says young rocks communicate in plain prose which makes them easy to read. “The oldest rocks tend to be more all-usive, even cryptic, speaking in metamorphic metaphor,” she says, adding that with patience and close listening they can divulge profound truths. There is a reason for this, she explains, “Like wine and cheese, rocks grow more interesting as they age, accumulating flavour and character.”

But while rocks are speaking, is anyone apart from geologists listening? On most days, no one is, because our worldview represents an “epistemic rupture sporadical that nothing of the past survives.” We believe that technology lift us from the oppression of natural history that for long has defined human experience. “As permanent exiles from the past, we have mixed emotions about it.” No wonder then that we are allowed a few moments of nostalgia but “living in the past” is looked down upon.

And this distaste for the past is the root cause of the problems that humanity faces today. “I suspect that our self-imposed exile from it (past) is the source of many ills: environmental malefactions and existential malaise are arguably both rooted in a distorted sense of humanity’s place in the history of the natural world.” She believes that if people embraced their shared past, which has made them the lucky inheritors of Earth, they would better understand the planet. In short, we need a new relationship with time.