Book>> The food of a younger land: A Portrait of American food from the lost WPA files • by Mark Kurlansky • Riverhead books • RS 500

During the Great Depression, US Works Progress Administration hit upon a novel way to find employment for out-ofwork scribes and writers.

It asked them to document what people in different regions of the US were eating. At the end of the Depression, the agency gave up the project. The material collected languished in the archives.

Food writer Mark Kurlansky has ferreted them out. It’s a veritable treasure trove. One Roaldus Richmond lists many fruits people in Vermont pickled in the 1930s: pears, peaches, apples, plums, raspberries and cucumbers. Richmond also includes a recipe for lemon pickle. Did the people in the northeastern state of the US get enough on the southern fruit to pickle it? Or maybe lemon was seasonally available, so people bought them and preserved it for later years. There is also a delightful account of baked beans of New England by James Francis Davis. 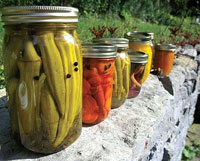 The dish originated with the Puritans, who shunned all work on Sabbath. They made the dish on Saturday night and ate it on Sunday. Davis wrote that the households of the 1930s kept to Saturday night culinary ritual, even though the religious injunction against Sunday work was relaxed.

Kurlansky’s discovery’s significant because it comes at a time when the world is discovering the value of local food. It portrays communities who were more food resilient, and self-sufficient, than most of us are now.

Robi Chowdhury is a playwright