In the early years of this century, companies such as deCODEme and 23andMe launched personal gene profiling services, heralding the era of consumer genetics. Their operations are subjects of investigation of Danish science writer Lone Frank’s new book, My Beautiful Genome. The investigation allows Frank to come to terms with a few personal demons: a family history of depression, alcoholism and breast cancer.

It also allows Frank to explain the limitations of consumer genetics. “The companies only decode less than one-thousandth of the genome, focusing on the mutations in individual letters of the genetic code known as SNPs (single nucleotide polymorphisms, usually pronounced ‘snips’),” she writes. They scan about a million SNPs looking for variants scientists have shown to be linked to disease. Frank subjects herself to genetic profiling. The results cause a range of emotions, from relief at not having the Alzheimer-causing gene, to confusion over whether her coffee habit has affected her breasts’ size. 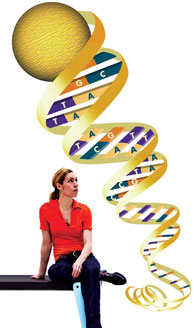 The science writer wants to have her full genome read to be totally assured. But she finds that research on a complete genetic profiling is still at an early stage and would cost thousands of dollars, compared with a few hundred for an SNP scan.

She also finds many experts doubting the necessity of such research. They believe that existing knowledge of the links between genes and disease lies mainly in SNPs, and there is little extra insight to be gained from the rest of the genome.

Frank’s family history of breast cancer prompts her to push for a more specialised test, but she is refused because there are not enough incidences in her family. This, she says, reminds us why regular screening can be better than genetic testing.

During the course of the investigation the scientist realises it is not easy to blame our genes for our problems. She interviews one of the discoverers of the DNA structure James Watson, travels to Iceland to meet deCODEme’s founder Kári Stefánsson, and Richmond, Virginia to meet epidemiologist Kenneth Kendler. Each encounter makes her confront a truism: genes do influence our identity. But they do so in complex ways. She also finds the interplay between genes and our environment is far complex than understood.

Frank concludes beautifully: “My genome is not a straitjacket but a soft sweater to fill and shape, to snuggle up and stretch out in. So who am I? I am what I do with this beautiful information that has flowed through millions of years through billions of organisms and has, now, finally been entrusted to me.”