Rise and fall of water managers

Book>> Waternama, A Collection of Traditional Practices for Water Conservation and Management in Karnataka Sandhya Iyengar publisher Communication for Development and Learning Bangalore 2007

Karnataka is home to hundreds of stories on water harvesting. Some of them have been documented, most others forgotten. A pity really, since a lot of historical evidence--some of it dating back to 300 bc-- attests to the water-management skill of communities in the state. Some of this wisdom is alive today, much of it forgotten. So while water conflicts are rife in many parts of the country--indeed a lot of the world--it is perhaps salutary to revisit the skills of traditional water managers who built irrigation tanks, constructed check dams, and built embankments. This is what this volume under review does.With contributions from journalists, agricultural scientists and historians this slim book covers a large time-span case studies of water-management practices range from those dating back to 1,000 years to ones which have came into vogue this century.

Historical records show that people in Karnataka knew the technique of constructing tanks as far back as 300 bc. Thousands of inscriptions dating back to the post-Mauryan period detail information on canals, bunds, depth of water, construction costs--every aspect of tank construction, in fact. While communities engaged in building small water bodies, kings undertook large irrigation works as a part of their religious and social obligations. They provided incentives to build tanks in new settlements, gave land grants, and even exempted people who build tanks from payment of taxes.

The accounts on this volume are based on a variety of historical records Mauryan and post-Mauryan inscriptions, texts like the Arthashastra, and accounts of travellers like Francis Buchanan Hamilton. The Scottish traveller who visited various parts of India in the late 18th and early 19th century praised the water management practices of people in modern day Uttara Kannada district, which had enough water even in dry summers.

Other stories in the book are from the recent past. There is, for example, an account of an embankment built 35 years ago by people of the Shiliga tribe in Uttara Kannada district. About 125 feet in length and eight feet in height, this structure stands erect even today and ensures availability of water all through the year. The dam was born out of the traditional knowledge, Jarukattu -- allowing free flow of floodwater during the rainy season and letting water collect in pits in summer. Constructed using local material, it has withstood the onslaught of rainwater during the torrential monsoons, while dams built using concrete and iron have been reduced to rubble.

It's not just water-conservation structures. The volume also has information on societal arrangements to manage water. The Neeruganti system is amongst them. Quite akin to the Neerukatti, in Tamil Nadu, this system involves entrusting a resident of a village with the responsibility of distributing water for irrigation. The village abides by the rules set by the Neeruganti. Farmers, in turn, make grain payments to this water manager. 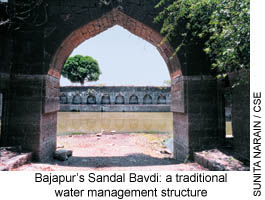 Today, however, these traditional managers are jobless. The village administration system has no place for them. That's again a serious loss for not only have water disputes become frequent, they have also exacerbated into inter-community and inter-state conflicts.

Like the Neeruganti system, there is a lot in the book that's of relevance today. The practices highlighted in this volume have mostly been taken from Bangalore, Kolar and Tumkur districts.Traditional systems here focussed on recharging shallow aquifers using tanks and check dams, and exploited groundwater through shallow open wells. Now the science behind groundwater management is almost forgotten. As a result, groundwater development has touched more than 100 per cent in these districts and the over exploitation has resulted in increases in fluoride levels of 8 to 10 ppm in certain pockets of Dharwar, Kolar and Tumkur districts.

The articles in the volume show how a lot of people discarded the traditional practices after borewells and submersibles came into vogue--most often at the cost of water security.